Through the first half of 1944 expectations rose that the western allies would open a ‘Second Front’ in the war against Nazi Germany. Few outside a small circle of Allied commanders and planners knew where the blow would fall exactly – and no German had any idea. Hitler ordered that an ‘Atlantic Wall’ be constructed along the coasts between Norway and the Pyrenees, certain that an Allied invasion would come, but not exactly where, wasting precious resources and troops. The Allies meanwhile adopted elaborate deception plans to conceal the area of the impending invasion.

Australian airmen, sailors and even soldiers became a part of this massive military operation, the largest mounted by the western Allies in the war, and one of the largest in history (exceeded only by operations on the Russian front). While from 1942 the war against Japan in the Pacific became the focus of Australia’s war, and the three Australian infantry divisions had returned from the Middle East within a year of the outbreak of the Pacific war, substantial Australian forces remained committed to the war against Nazi Germany.

The invasion was necessary because in 1940 Nazi Germany had occupied most of the continent of Europe. Although the Allies had launched an increasingly destructive bombing campaign against Germany, and had landed in Italy in mid-1943, the only way Germany could be defeated was by successfully crossing the English Channel to liberate the occupied countries and invade Germany itself, acting in concert with Soviet forces advancing from the east. Image: Map of the Normandy Landings.

The Allied landings on the beaches of Normandy were code-named Operation Neptune, and they began on 6 June 1944. (Operation Overlord, the code-name often used later, referred to the entire invasion-and-liberation of Normandy, and the date was slightly later than planned, delayed slightly by poor weather which almost disrupted the entire operation.)

The Allies made the most of several advantages: gaining sea and air superiority and knowing German plans having broken the secret ‘Enigma’ codes. Allied (and especially American) industrial and technological power gave the Allies a strong advantage. Even so, the challenge was to get the force to France and ashore and meet the inevitable counter-attacks. The defending Germans were commanded by Erwin Rommel, who had proved his worth in North Africa. After a year’s intensive planning and training (including devising new weapons and techniques, such as specialised armoured vehicles, landing craft, and even floating harbours called ‘Mulberries’) the force was assembled in secret.

Operation Neptune involved 7,000 Allied warships and transport vessels carrying 130,000 troops, about 70,000 of whom went ashore on D-Day itself. They were preceded by a vast air armada landing British and American paratroops and glider-borne infantry behind the beaches, seizing bridges and junctions. At dawn, thousands of British, Canadian and American troops landed on the beaches. The troops landed on five beaches on a 75-kilometre front: the Americans on Utah and Omaha, the British on Gold and Sword, and the Canadians on Juno. The invasion force was commanded by the joint Allied commander-in-chief, the American General Dwight Eisenhower, with air and naval forces under British officers.

The invasion force also included up to about 3,300 Australians.

Ships of the Royal Australian Navy continued to serve in the Mediterranean and in the seas around Europe, with about 500 sailors serving in British warships, from battleships down to landing craft. Several Australians commanded flotillas of tank-landing ships, while others piloted landing craft carrying British and Canadian infantry onto the beaches.

Australia’s main contribution was in the air. Up to 2,500 Australian airmen served in about 200 Royal Air Force squadrons supporting the impending invasion of north-west Europe, including ten RAAF squadrons of all kinds. Australian aircrew served in transport and glider-towing squadrons which carried airborne troops, fighter-bombers and fighters operating directly over the beach-head, and many in heavy bomber squadrons which dropped thousands of tons of bombs in support of the landings. Coastal Command squadrons operated far from the beaches of Normandy, protecting the Channel crossings from German naval forces. The Operations Record Book of 453 Squadron, RAAF, on the morning of 6 June 1944 recorded ‘The show is on at last.’ 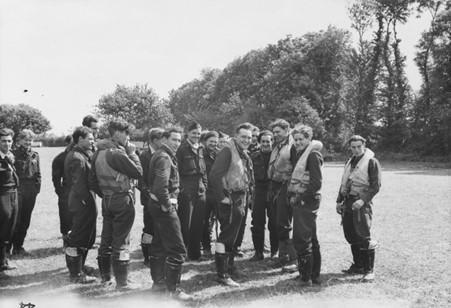 Photo: Normandy, France, July 1944. Australian and English pilots with No. 453 (Spitfire) Squadron which operated from an advanced landing ground over the Normandy battlefields. AWM UK1529.

About a dozen Australian soldiers were attached to British army formations, learning the ropes in preparation for amphibious operations in the Pacific later in the war.

Thirteen Australians were killed on D-Day itself, two from the RAN and 11 from the RAAF. However the three months after the Normandy invasion represent the peak in RAAF casualties for the entire war. Some 1,117 Australians are buried or commemorated in Commonwealth War Graves Commission cemeteries in the region, killed in the three months of the battle for Normandy.

Allied forces made a successful lodgement on D-Day and in the following weeks poured tens of thousands of troops ashore and gradually enlarged the beach-head. After ten weeks of bitter fighting in the close ‘bocage’ (hedge-row) country of Normandy, British, Canadian and American forces at last broke out of the beach-head. The ten-week battle cost over 200,000 Allied casualties, but it had cost the Germans 240,000 killed or wounded and over 200,000 captured, the greatest single defeat ever inflicted on Axis forces in the war. The break-out led to the swift liberation of Paris and the whole of France and most of Belgium by the end of September 1944. Photo: Paris, France, 23 August 1944. This is how the Place de l'Etoile with the Arc de Triomphe in the centre looked at three o'clock to a RAF Spitfire pilot of a Photographic Reconnaissance Unit when the news of the liberation of the city of Paris was received in London. AWM SUK12895.

Though a further eight months of fighting remained, in the liberation of the Netherlands, the German counter-offensive in the Ardennes, the crossing of the Rhine and the final advance into Germany to meet Soviet forces on the River Elbe, the success of the Normandy landings was arguably the key stage in the Allied victory over Nazi Germany. Australian airmen supported the campaign in north-west Europe throughout. Photo: Crew of Mitchell Bomber ‘B Beer’ of No 98 Squadron which played a vital aerial role during D-Day. This informal photograph was taken in England on 11 June 1944. Three of the crew were members of the RAAF. AWM UK1479.

Lieutenant Kenneth Hudspeth of the Royal Australian Naval Volunteer Reserve, a teacher from Tasmania, was twice awarded the Distinguished Service Cross (his second) for commanding a midget submarine during the invasion. His ‘X-craft’ acted as a navigation beacon marking the edge of Juno, the Canadian beach, remaining undetected off the beaches for two days before the invasion (which had been postponed because of bad weather). He received the DSC ‘for gallantry, skill, determination and undaunted devotion to duty’ as part of the Combined Operations Pilotage Parties supporting the landings.

Major Henry ‘Jo’ Gullett, who had served with the 2/6th Battalion, AIF, in North Africa and in the Pacific, was sent as an observer to serve with a British division, becoming the first Australian to set foot in Normandy. Heavy casualties among the battalion to which he was attached, the 8th Royal Scots, soon saw him commanding a company, until he was wounded in July.

Australian aircrew flew over Normandy, experiencing heavy losses – one Australian fighter squadron lost more than twice its original strength in three months. An Australian Typhoon ground attack pilot, Warrant Officer George Martin, was shot down and wounded while attacking German troops on D-Day. Pretending to be a deaf-mute, he was hidden by a French family until liberated by advancing Allied troops.

RAAF aircrew also supported the invasion far from the beaches, attacking transport targets to prevent German reinforcements reaching Normandy, or protecting convoys supporting the forces in Normandy. On the night of 10-11 August, for example, Pilot Officer Ivan Southall’s 461 Squadron, RAAF, Sunderland helped Allied warships to find and sink a German submarine, U-385 attempting to leave the U-boat base of Brest.

Australians played a small part in the greatest, most risky and arguably most significant military operation of the Second World War, a contribution which deserves to be remembered.

Published accounts of the Australian contribution to the Normandy invasion are hard to find, but Lachlan Grant’s article on Australians in the Normandy invasion, in Wartime magazine, April 2014, provides a general overview. Henry ‘Jo’ Gullett’s memoir, Not as a Duty Only, describes his time fighting in Normandy. John Herington’s Australian official history, Air Power over Europe describes the RAAF’s part in air operations supporting the invasion.