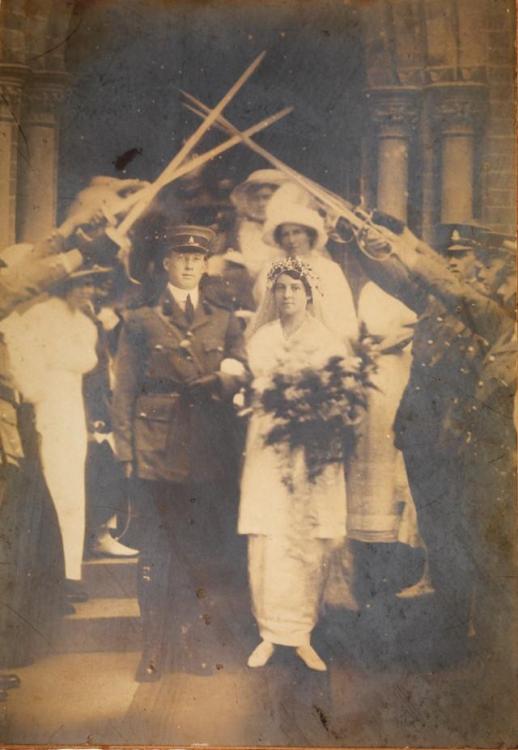 Photo: Anzac Memorial Collection. Gift of the Descendants of William and Marguerite Cheeseman, 2018.

On 30 January 1915, 21-year-old William Joseph Robert Cheeseman and 25-year-old Marguerite Ruperta Tracy Scott were joined in holy matrimony at the beautiful St Clements Anglican Church in Marrickville. William had joined the militia in 1912 and in February 1913 was commissioned in the 16th Infantry Battalion. On the outbreak of the Great War, he became the signals officer at Newcastle Defended Port. As they walked down the aisle, the happy couple received a guard of honour from uniformed infantry officers with their swords raised to celebrate the Cheeseman’s wedding. Pre-war, this had become a common and popular tradition amongst NSW militia units with their distinctive uniforms and regimental badges; unlike the uniform of the Australian Imperial Force (AIF) there were no cuffed sleeves and not a Rising Sun to be seen. 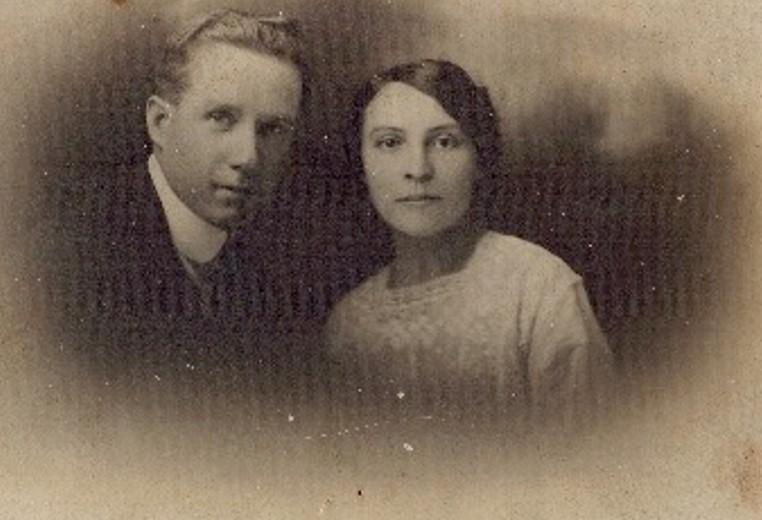 Photo: The Cheeseman’s eight weeks after their wedding. Anzac Memorial Collection. Gift of the Descendants of William and Marguerite Cheeseman, 2018.

Like many wartime brides, Marguerite would soon say a sorrowful goodbye to her new husband following his enlistment for overseas service in the AIF. William would not come home until the middle of 1919. But he was indeed one of the lucky ones who did return, and Marguerite’s long and patient wait had been brightened by many congratulatory messages from AIF base records office in Melbourne regarding her husband’s impressive military achievements.

On 18 October 1915 Cheeseman joined the AIF as a Lieutenant. He embarked for Egypt in November with the 30th Battalion and was promoted to Captain in February 1916. Reaching France in June, he commanded his company at Fromelles and on the Somme. He received a special Mention in Dispatches in November 1916 for his conspicuous service and it was to be the first of many military honours. In the advance on Bapaume on 17 March 1917 he organized a bombing and Stokes-mortar attack which captured 150 yards of German trench and then, when his company was held up by machine-gun fire, he dislodged the enemy by a flanking movement. Six days later at Beaumetz, Cheeseman launched a successful counter-attack when the outpost line he was commanding was surprised by a strong enemy force. For his ‘conspicuous gallantry and devotion to duty’ the King honoured him with the Military Cross. The French President awarded him the Légion d'honneur. And General William Birdwood sent ‘Dear Cheeseman’ a personal letter to ‘congratulate you very heartily’ for the Military Cross awarded for his ‘conspicuous coolness and courage.’ Cheeseman’s military prowess and reputation were rising and in April 1917 he was promoted to Major.

‘A determined, reliable and conscientious Officer’[1]

Between April and June 1917 Cheeseman was at the Senior Officers School in England where he attended a course of instruction. According to the Commandant there he was ‘an excellent stamp of Officer whom I recommend to command a Battalion at once. He has thoroughly entered into the spirit of this course. I regard him very highly.’ In September 1917, the commanding officer of the 53rd Battalion was killed at Polygon Wood. Aged just 23 years, William Cheeseman was subsequently promoted to Lieutenant-Colonel becoming one of the youngest battalion commanders in the AIF. He was gassed at Villers-Bretonneux in April 1918 and was invalided to the UK. He later returned to his unit and saw action at Morlancourt, Amiens, Péronne and Bellicourt. At Bellicourt, on 1 October, he again ‘showed marked gallantry and initiative’ by his leadership and brave actions under enemy fire. According to the London Gazette:

‘His battalion had to attack at dawn, and to reach the start line had to move over a mile and a half of ground … in the dark. When dawn broke they came under heavy converging machine-gun fire, and he got his men into artillery columns and personally led them over to the start line … Later in the day he made a reconnaissance forward under exceptionally heavy fire, and obtained most valuable information.’

For his dauntless actions that day, Cheeseman was awarded the Distinguished Service Order. A popular AIF leader and despite his youth, he was highly regarded by his superiors; he was subsequently Mentioned in Despatches in 1918 and again in 1919.

Cheeseman returned to Australia in June 1919 and was reunited with Marguerite. He went into business as a storekeeper at Taree in NSW and in the 1920s the couple were blessed by the birth of two daughters. In the early 1930s William became the manager of a Woolworths branch in Sydney and in 1936 the family moved to Adelaide following William’s promotion to work for Woolworths in South Australia. Tragically at the age of 44 he died following an operation for appendicitis on 23 April 1938. He was cremated in Adelaide and his ashes were buried in Sandgate Cemetery in his home town of Newcastle. William Cheeseman was survived by his wife Marguerite and their two teenaged daughters, Josephine and Nell. 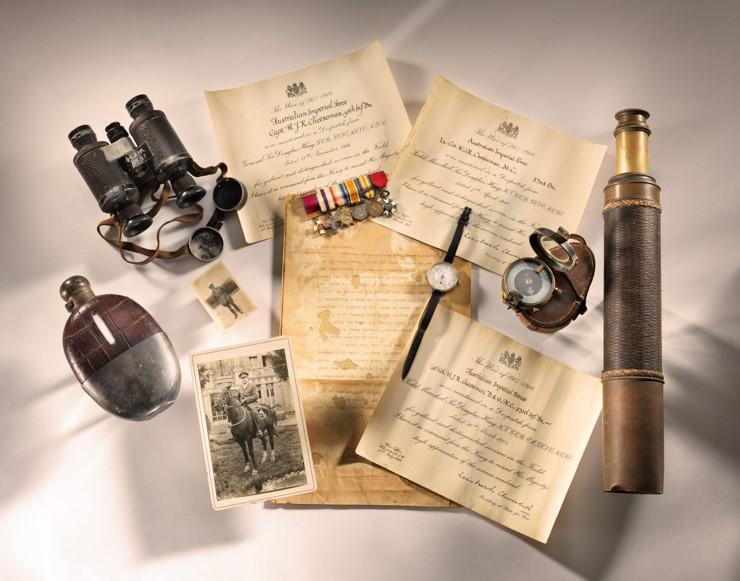 Photo: Anzac Memorial Collection. Gift of the Descendants of William and Marguerite Cheeseman, 2018.

In 2018 Cheeseman’s wartime memorabilia was very generously donated to the Anzac Memorial by William and Marguerite’s descendants. The endowment included his remarkable set of medals, field telescope and binoculars, hip flask, field compass and case, watch, violin and a cigarette box. His Mentioned in Dispatches certificates and many photographs were also part of the donation. Today a selection of Cheeseman’s wartime possessions is proudly on display in our permanent exhibition.