The Home Soil
The eight walls of the Hall of Service display soil from 1,701 New South Wales' towns, cities, suburbs and homesteads given as a home address by First World War enlistees.

Explore the Hall of Service artwork in our new digital interactive. Delve into the stories of those who answered the call to serve, and learn about the communities who generously contributed soil in remembrance of them.

To realise artist Fiona Hall's concept, the soil samples were collected over fifteen months from March 2017 to June 2018 with the generous participation of hundreds of public volunteers and NSW state and commercial surveyors.

“My resolution of the space is an artwork, but for me the benchmark of its success, now and over the long term, will reside not in its authorship but in its capacity to enable viewers to feel a deep connection and resonance with our service given in the face of war.”
Fiona Hall, artist

The below map complements the Hall of Service and is a comprehensive digital record of each NSW soil collection. Click on a yellow marker to find out more about that collection. To find a place name using the map's legend, click the icon on the far left of the map's header bar. To open the map in a new browser window on your device,  click the square icon on the far right of the map's header bar.

If you have any questions about this map or the NSW Place Names, please contact the Office for Veterans Affairs. 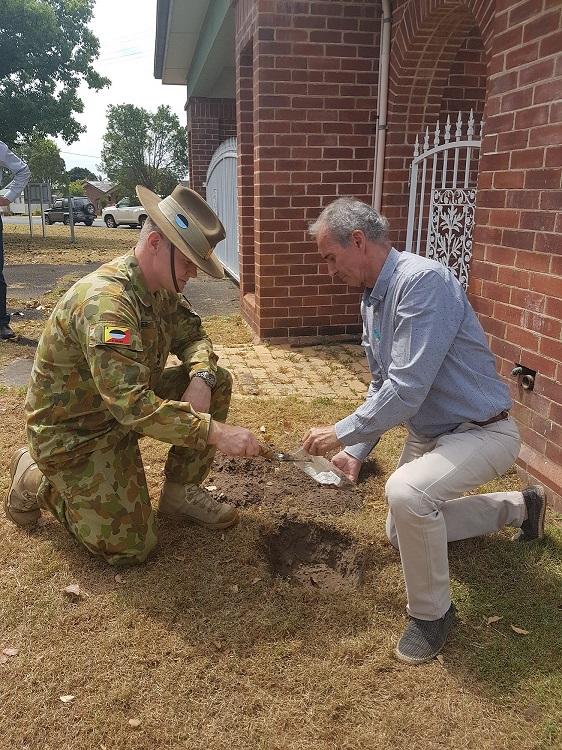 The Australian Imperial Force (AIF) Project database of First World War enlistee service records was the authority source for compiling the historic list of NSW place names for Fiona Hall’s artwork, based on enlistee addresses. Initial investigative research by Dr Peter Orlovich, a 50-year honorary member of the Geographical Names Board (GNB), saw the list of place names grow from an initial 1,232 names to 1,680. With further review from the GNB and NSW Office for Veterans Affairs, feedback from state surveyors and local communities, 1,701 place names were identified. Bungarby, was the last place added in May 2018.

As outlined in Fiona Hall's proposal, the list of 1,701 place names encompasses a broad range of cities, towns and districts of the state. It encapsulates, in its spectrum of names, our early colonial history, and registers the country’s long time indigenous presence. It displays the geographical reach of the call to serve, and signals the willingness and enthusiasm of so many from diverse regions who answered the call to join the war. It contains the incalculable loss and grief of communities across the state whose men and women did not return. It is a list of service offered, which leaves its legacy to us today.

“The project not only facilitates obtaining the earth samples, but also creates an informative and timely opportunity for community and educational involvement across the state during the centenary of the war. The placement of the earth in the Hall of Service provides a way for each community to feel an enduring connection with the Hyde Park Anzac Memorial.”
Fiona Hall, artist

The coordination of the Soil Collection Program involved 18 months of collaboration between the Office for Veterans Affairs, DFSI Spatial Services and the Geographical Names Board of NSW (GNB).

The GNB provided spatial mapping expertise to select and map appropriate collection sites for all 1,701 places, noting landowners and access issues. The choice of each soil collection site involved investigation of First World War Memorials within or near to each place, and other significant community spaces including schools, halls and parks. In areas where these structures were not located or not available, such as very remote areas, soil was collected from a safe area at the discretion of the collector.

Key to the Program’s success, in addition to the expertise of the GNB, was Spatial Services’ Survey Operations and a community engagement strategy to recruit an army of volunteer soil collectors.  Over fifteen months soil samples were collected by state and commercial surveyors, representatives of local, state and federal governments, RSL Sub Branches, schools, historical societies, rural fire brigades and Aboriginal and Torres Strait Islander veterans. The Surveyor-General’s office actively engaged with the NSW Surveying Taskforce, Association of Public Authority Surveyors NSW, The Association of Consulting Surveyors NSW and the Institution of Surveyors NSW. More than 400 stakeholders registered online to collect soil and more than 40 per cent of total soil samples were collected by the NSW public.

Among the number of poignant stories to emerge from public soil collections were the efforts of the more than 190 schools who contributed soil samples, with many incorporating collections into their 2017 Remembrance Day commemorations. In Weimoringle, in the state's far north, local Aboriginal Elders burned native Gidgee timber to ash in place of soil to represent the location Dennawan, an historic Aboriginal reserve in Culgoa National Park. At Langawirra Station, in the state's far west and the home address of a single First World War enlistee, a deep red soil from the drought affected region was collected near to the Station's Bureau of Meteorology rain gauge. Community events brought together soil collectors from multiple generations and backgrounds to tell the stories of New South Wales then and now. 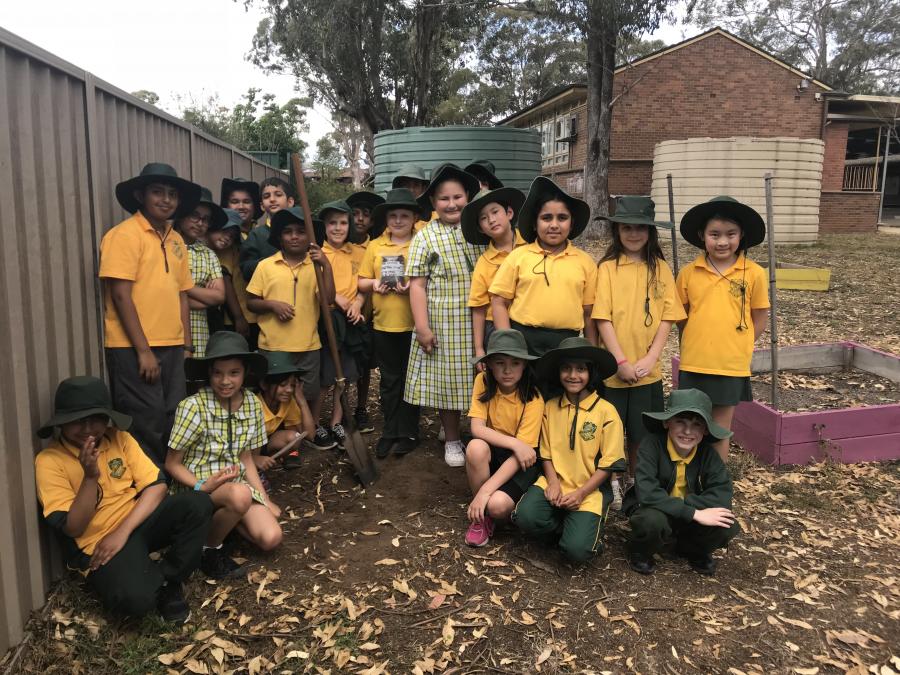 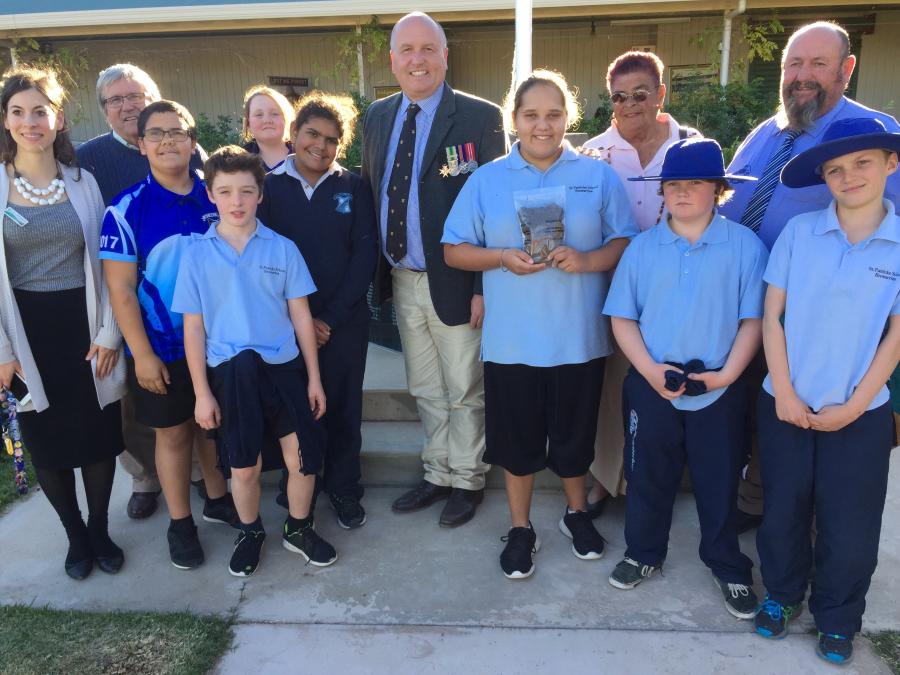 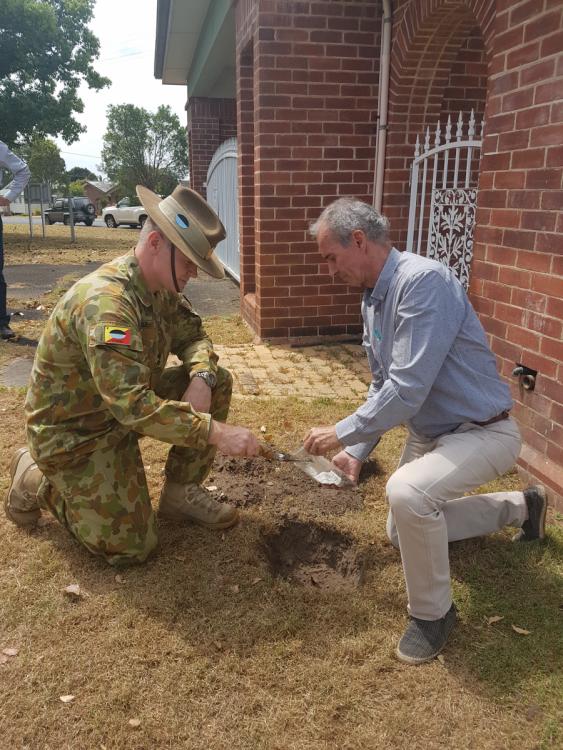 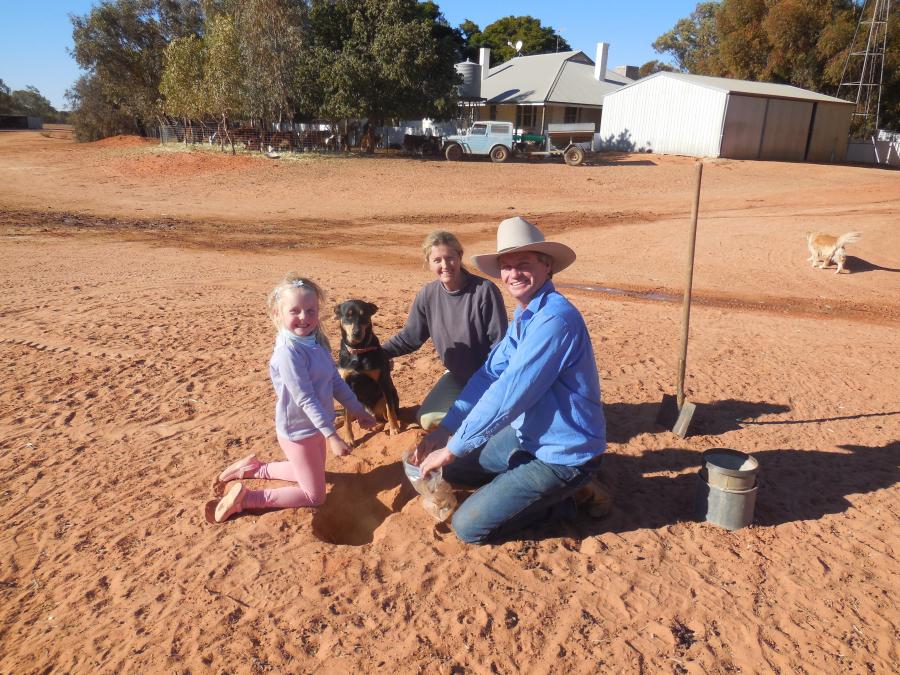 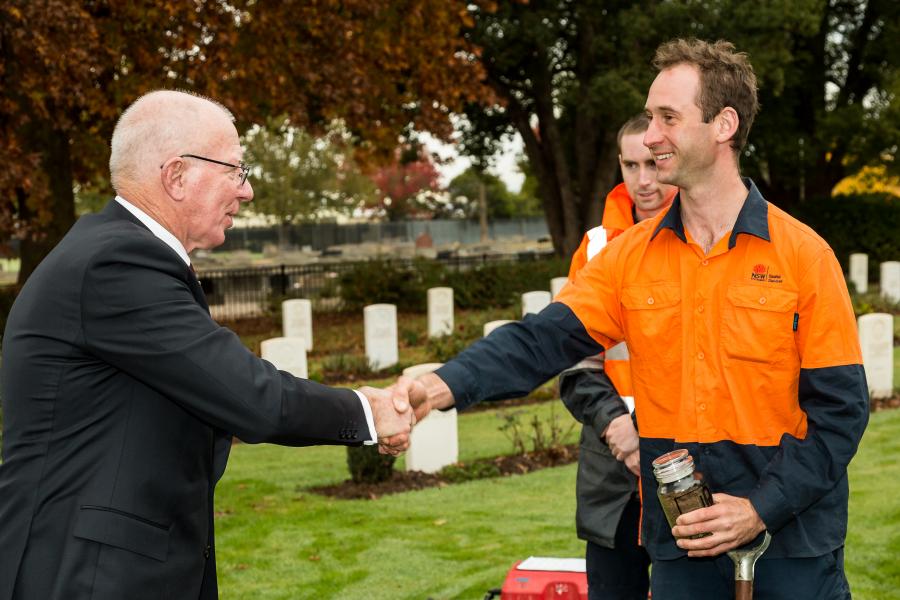 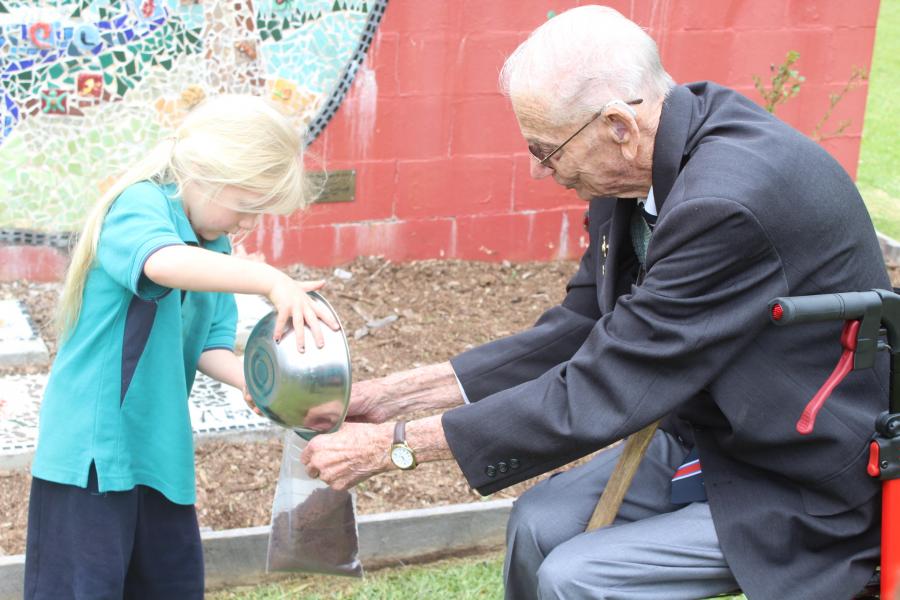 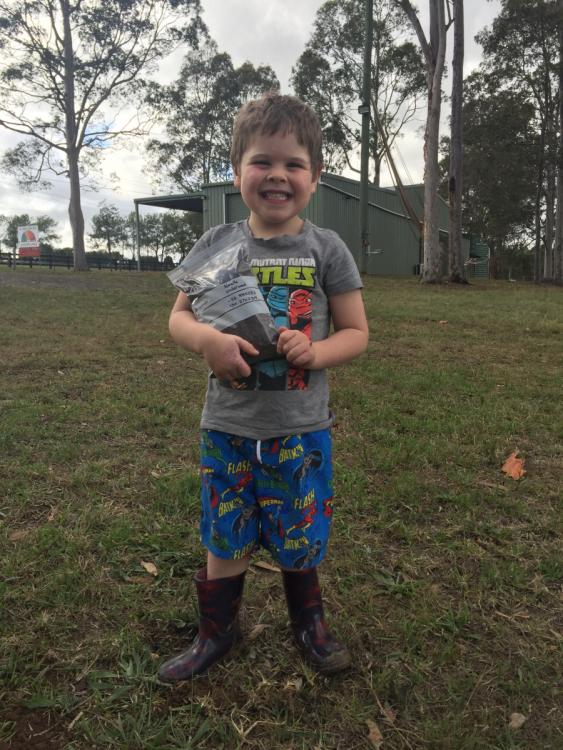 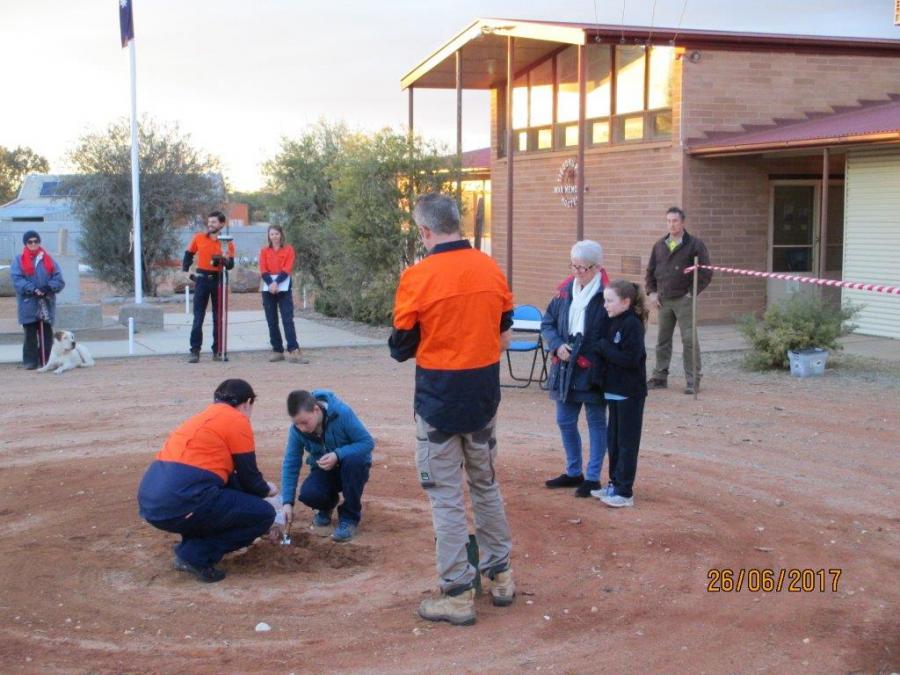 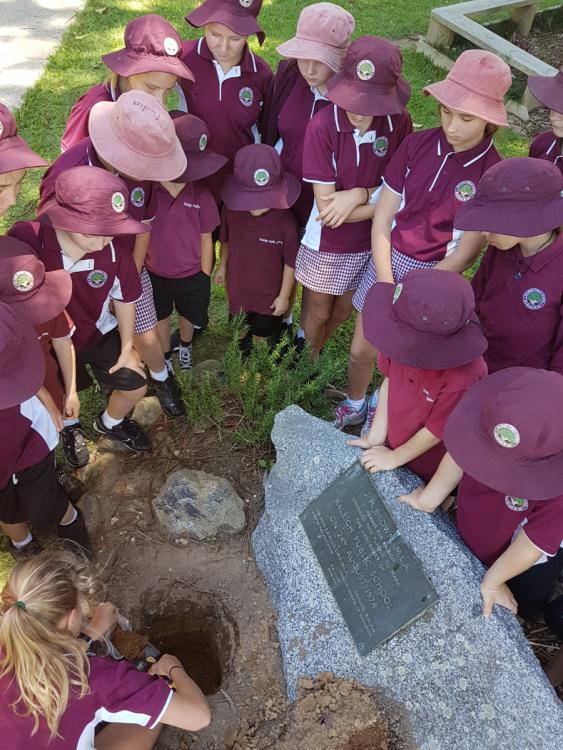 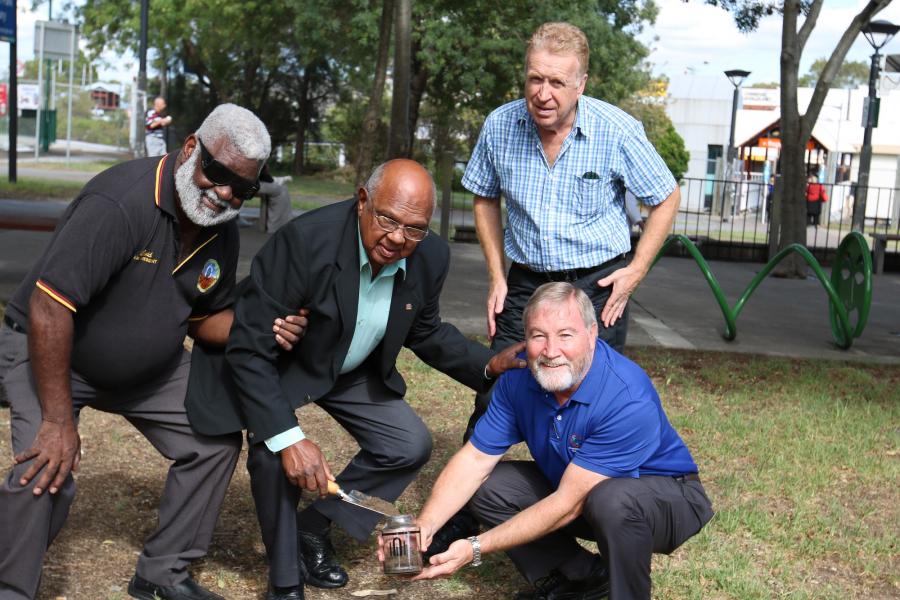 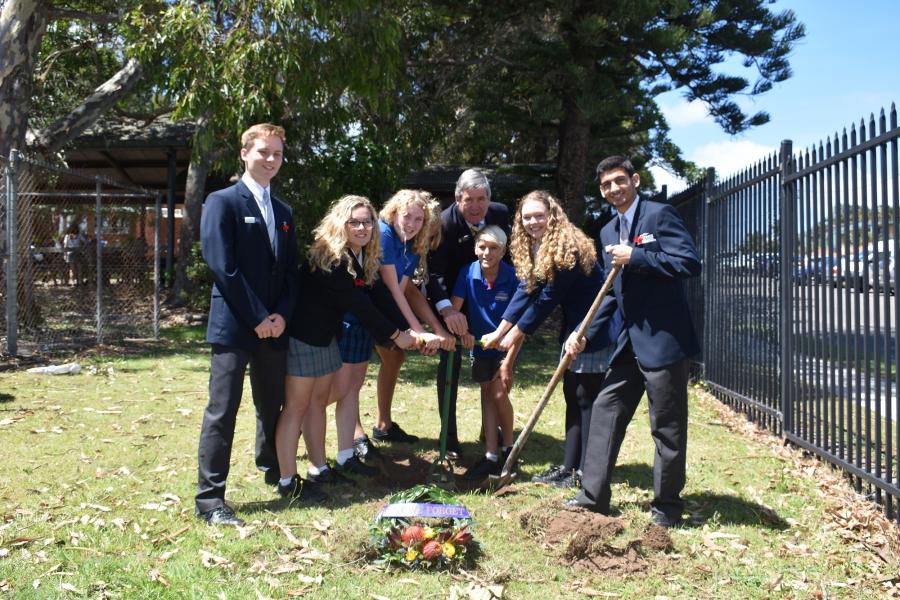 1916— 5th Australian Division entered the front line near FLERS on the SOMME. The Somme battlefield was a muddy, cratered wasteland

1944— Japanese aircraft crashed into HMAS AUSTRALIA in a kamikazi attack during the Battle of LEYTE GULF, Philippines. 30 Officers and men, including the CO, were killed and 64 were wounded