The Anzac Memorial was designed as a sculptural monument, a unique collaboration between architect Charles Bruce Dellit and sculptor George Rayner Hoff; it is arguably one of the finest examples of the union of architecture and art in Australia.

The building is a striking architectural form, symmetrical on both axes. It uses elements reminiscent of traditional Gothic architecture (buttresses, cathedral windows, high ceilings) in the Art Deco style. The Memorial is adorned externally with twenty sculptures representing the units of the Australian Imperial Force (AIF). These are the sentinels of the building, keeping watch while representing the fallen to whom the building is dedicated. 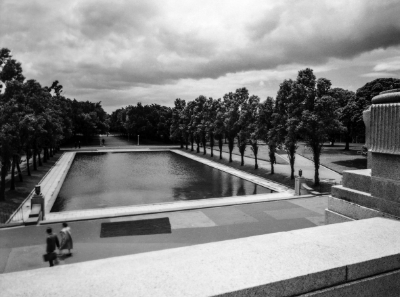 The Pool of Reflection