Wendy Frew’s great-great-grandmother Alice Leane watched five of her sons and six of her grandsons march off to fight during the Great War. For Australians at the time, the Leane men were held up as the epitome of brave patriots willing to fight and die for King and Empire. The Leane women were also regarded highly, although their stories have until now largely been obscured. The men loomed large in Charles Bean’s official history and ‘the Fighting Leanes’ are well known to historians today. Their military achievements were indeed remarkable. They were acknowledged at the time with numerous honours, mentions in despatches, and swift promotions up the ranks.  Yet when the author set out to discover who the ‘real’ men were beyond their impeccable military credentials, she stumbled across a longer, much richer genealogical tale. As the subtitle of this new book suggests, the Leane’s story, was not just a war story. It was also a complex saga of crossed continents and colonisation, and the complicated dynamics of a migrant family in search of prosperity and religious freedom. And a number of extraordinary women too.

The Leane’s story, was not just a war story. It was also a complex saga of crossed continents and colonisation, and the complicated dynamics of a migrant family in search of prosperity and religious freedom.

In the first part of the book, the reader is transported back to the wilds of windswept 1780s Cornwall, England where the Leane family had lived the same traditional way of life for generations. They were tenant farmers and craftsmen occupying low built cottages on small plots of land. Mining, farming, rural crafts (and illicit smuggling) had characterised life in remote Cornwall for hundreds of years. But the winds of change were blowing, and by the 1830s emigration to the colonies had become a popular choice for many - particularly if they were young, married, respectable and had useful occupations. In the nineteenth century, millions left Britain as assisted migrants bound for Canada, North America, Australia and South Africa. And if, like the Leanes, they were also religious non-conformists wishing for more political and civil freedom and a better life for their children, places like the newly established ‘free’ colony in South Australia, with its high wages, abundant produce and new opportunities beckoned.

In May 1852, Thomas and Jenny Leane and their eight children, from eldest born nineteen-year old Felix to two-year old Caroline, embarked as steerage passengers on the Gloucester bound for South Australia. How they felt standing on the dockside at Plymouth, about to leave their wider familial connections and way of life, one can only imagine. They left no personal recollections, however life aboard an emigrant ship is wonderfully described by the author whose broad research shines through in her very compelling account of their long and uncomfortable journey. Twenty-three of their fellow passengers died during the perilous four-month voyage – mostly from infectious diseases such as measles and scarlet fever. This was certainly not an unusual statistic for emigrant ships, however for these aspiring migrants, anonymously consigned to a watery grave, their hopes and dreams for a new life in a new world were never to materialise. Happily, the Leanes all survived, and the family arrived in Adelaide in mid-August 1852, shortly after gold had been discovered in neighbouring Victoria.

But it was godliness rather than gold that shoe-maker Thomas and his family had travelled to the other side of the world for. Like most Methodists, the Leanes believed in hard work, self-denial, self-help and discipline. It was a moral coda many others shared and together with other Cornish emigrants, the family gradually established themselves in the southern colony. Thomas and Jenny’s children all went on to have busy and interesting, albeit at times, complex and messy lives. They were leading non-conformists, active gospel preachers, temperance campaigners, women’s suffrage supporters and poetry writers. Frew diligently places their experiences within the colonial context of the social, political and economic history of South Australia and within the wider circumstances of Australia on the cusp of Federation.

Fourth son Thomas John Leane married fellow Cornish Methodist Alice Short in 1865. Alice was just five years old when she arrived in Adelaide with her father, step-mother and younger sister in 1851. It is Thomas and Alice’s branch of the Leane family which retains much of the focus of the rest of the book. Thomas continued in the family trade of shoemaking and Alice ran a corner store from their family home. And through hard work and good luck they created a comfortable life for themselves. Between 1866 and 1889 Alice gave birth to eleven children although, as was common at the time, three would die in infancy. Eldest son Edwin Thomas or Ted as he was known, served as a Lieutenant with the 4th South Australian Contingent of Bushmen during the Boer Wars, together with his younger brother Allan William. Cousin Frederick Thomas Leane signed up with the 5th and the wider politics of that contentious war are astutely outlined in chapter five. But it was during the Great War where the Leane family would, in the words of official historian Charles Bean, become ‘the most famous family of soldiers in Australian history.’

...the Leane family would, in the words of official historian Charles Bean, become ‘the most famous family of soldiers in Australian history.’

When war was declared in August 1914, Alice Leane’s sons and grandsons heeded the call to enlist. Youngest son Benjamin and seventh born child Raymond were amongst the first to sign up that same month, whilst veteran Ted who was now forty-seven years of age enlisted in September. Forty-five-year-old Ernest joined up in January 1915 and third born, forty-three-year-old Allan William followed in May. His wife Fanny begged him not to, because she feared he would never return home. But after he had been cruelly sent a white feather, Allan felt he had no other choice. Their sister Ethel’s adopted son Clarrie Fairley also enlisted and over the course of the war, Ted’s four sons and Ernest’s two eldest also answered the patriotic call.

Using their letters home and the diaries they kept, Frew describes the Leane’s wars through their own eyes whilst also placing their early wartime experiences within a particular historical moment; the Gallipoli Landing, the vicious fighting in the trenches, and the subsequent monotony and misery, the homesickness and the general carnage all around them. In his diary after only a few days on the peninsular, Ben noted that he saw men ‘with great holes in their bodies, men with part of their head blown away, some with the face all shattered.  Ben was himself later injured and sent to England to recuperate. He returned to Gallipoli in August 1915. When the decision to evacuate was taken a few months later, his brother Ted expressed his rage and anger at ‘all the imbeciles’ in the British officer class, believing that ‘the responsibility for this fearful bungle’ lay solely with them. He was also ‘ashamed of the whole show’.

Yet the Australians were needed elsewhere – in France on the Western Front. It was here where the Leane’s war turned for the worst, as it did for thousands more Australian families. Ernest’s son Corporal Arnold Harry Leane was killed on 5 November 1916 at The Maze, a complex of trenches near the village of Flers in the Somme valley. A memorial headstone was later erected in Dernacourt Communal Cemetery, but his actual grave is unknown. His uncle, Allan William was killed in action on 4 January 1917 at Delville Wood (Bois d’Elville). He had recently been promoted to lieutenant-colonel and his unit erected a cross at the Dernacourt Military Cemetery where he was buried. Fanny Leane’s worst fears had sadly come true. It was his brother Ted who sent the telegram bearing the dreadful news to their elderly mother Alice waiting at home in South Australia.  There was more to come. Her youngest son Ben (who had been awarded a DSO in 1916) was blown to pieces by a 77mm German shell in April 1917. Raymond later went and searched for his beloved brother’s body and what he found, ‘he gathered up in his arms and buried in the sunken road by Bullecourt'. The following day his nephew Clarrie was wounded in the foot and an eye which never regained its sight. In 1921 Ben’s body was reinterred in the Queant Road War cemetery about a mile from Bullecourt. He left behind a twenty-four-year old widow Phyllis and two small daughters, Gwen, and Marjorie who was still a babe in arms. Despite her young age, Phyllis did not remarry, even though Ben had encouraged her to do so, should he be killed. She lived until she was eighty-two. Ted’s son Captain Allan Edwin Leane was the family’s final fatality – lost somewhere on the Hindenburg Line in April 1917. His body was never recovered, although his personal effects which included three pipes, a cord for his lighter, a hairbrush, some toiletries and a compass were sent home to his mother Katie in Sydney. Today, the names of 10,885 Australians who were killed in France and have no known grave are inscribed at the memorial at Villers-Bretonneux. Allan Edwin Leane is one of them.

The Great War took over 60,000 Australian lives, whose remains lie in foreign soil. Thousands more came home and later died of long-term injuries, succumbed to the influenza pandemic of 1919, or were slowly lost to the bottle or to suicide, the weight of their war service too dreadful to bear. Every family and neighbourhood in every country town, coastal village and capital city in Australia was affected by the war and its deeply enduring consequences.

The Leane’s war, was indeed a remarkable one. Yet by placing it within a much wider national narrative, of mass migration, colonisation, war and its aftermath, it is also a broader human story of struggle and survival, tragedy and triumph. Meticulously researched and written in beautiful and at times lyrical prose, Leane Times, as both a colonial family drama and a history of war, is an incredibly compelling read. As such, it will appeal to a broad audience, and therein perhaps lies one of its greatest strengths.

Meticulously researched and written in beautiful and at times lyrical prose, 'Leane Times', as both a colonial family drama and a history of war, is an incredibly compelling read.
Dr Catie Gilchrist, March 2020 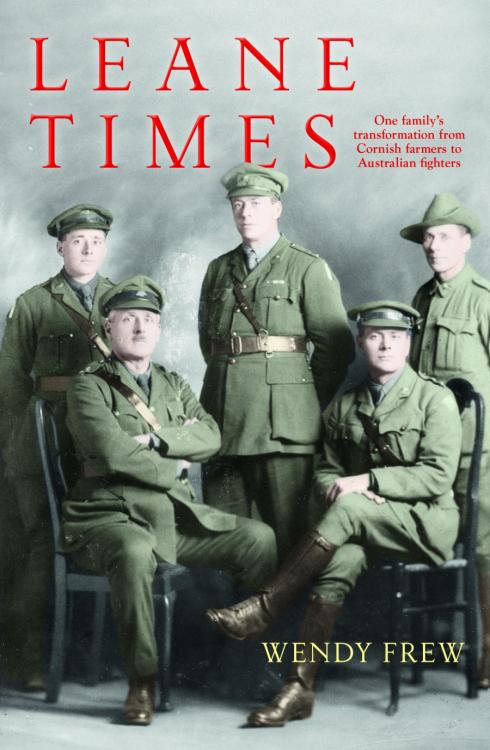 Email the Anzac Memorial's retail manager to place an order