Australian-born Charles Bruce Dellit was only 32 when he won the Anzac Memorial design competition. The son of furniture manufacturer Albert Dellit and his second wife, Agnes, he was educated at Christian Brothers College, Waverley, before gaining a position with architect John L. Berry. He studied architecture at the Sydney Technical College under Byera Hadley from 1912 to 1918 – then the only institution that offered training in the subject – and continued his professional education by attending lectures in design at the University of Sydney in 1919–20, after Leslie Wilkinson founded the Faculty of Architecture there. His early promise was reflected in the publication of two of his student projects in the journal Architecture. In 1920 he was awarded second prize in the competition to design the proposed war memorial for the Blue Mountains village of Leura.

Dellit moved to Queensland in 1920 to work as chief draftsman for Hall and Prentice on the design of the Brisbane Town Hall. While there he married Victoria Sara Miller, before returning to Sydney in 1922 to join Spain and Cosh, one of the oldest architectural firms in the city. Dellit took responsibility for the external facades and details of several prominent commercial buildings, such as Marcus Clark and Co., Railway Square; Scottish House, Bridge Street; and the Evening News building on the corner of Elizabeth and Castlereagh streets; and Dalgety’s building in Newcastle.

Dellit registered as an architect in June 1923, and went into private practice six years later. His early private commissions were an extension to Australia House, Wynyard Square (the original having been designed by Spain and Cosh); an entry for the Anglican Cathedral in Canberra; and Kyle House, Macquarie Place. The design of Kyle House features the “monumental entrance arch” that became one of Dellit’s characteristic motifs.

An inventive and original architect

Dellit was a flamboyant, larger-than-life character who worked incredibly long hours and required his staff to do the same. He was “an exceptionally talented draftsman and renderer” and “a gifted painter” in watercolours and oils. With his contemporary Emil Sodersten, he pioneered the Art Deco style in Australia.Winning the design competition established Dellit’s reputation “as an inventive and original architect”. Many consider the Anzac Memorial building itself to be Australia’s finest example of monumental Art Deco architecture.

'To be content to carry on the traditions of the past is not enough; these traditions are but the foundations from which new creative forms should be developed. Modernity has produced such wonderful materials and methods for the use of mankind – glass, steel, reinforced concrete, terra cotta – each with possibilities unknown to the ancients – mechanical inventions and mass production, and so on in endless array'.
Charles Bruce Dellit

The Art Deco style evolved from the Exposition Internationale des Arts Décoratifs et Industriels Modernes held in Paris from April to October 1925. Pursuing this ideal, Dellit believed that it was “only logical to think in new terms in matters of creative design” 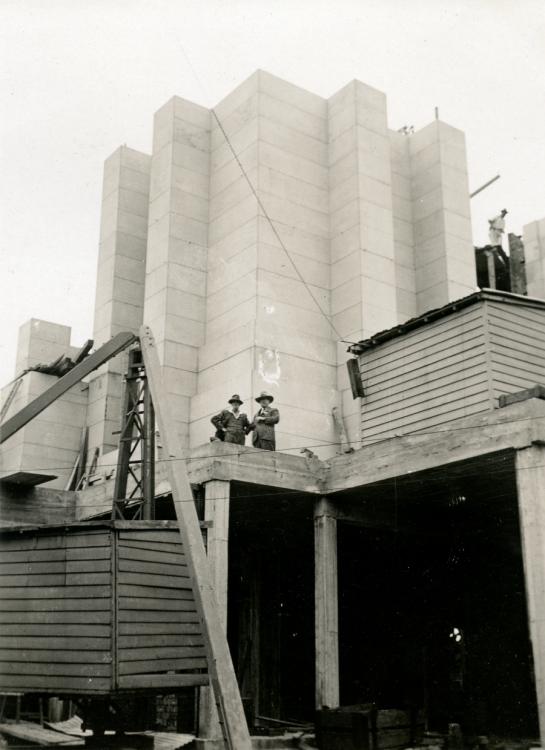 In designing the Anzac Memorial, Dellit used strong imagery to express the collective sense of mourning over the deaths of so many young men from New South Wales. The building as a whole makes a strong statement through its very solidity. Art Deco flourishes, such as the ziggurat-styled apex and the amber glass window panels etched with the rising sun and decorated with skyscraper-shaped forms at the base, place the exterior of the monument squarely in the inter-war period. The final form of the sculpture must be credited to sculptor Rayner Hoff, whom Dellit engaged after winning the competition. It was Hoff who persuaded Dellit to change his own proposals for sculptures, which relied on obscure imagery and symbolism. Hoff greatly strengthened the external imagery by replacing Dellit’s seasons and sculptures representing the arts of war and peace with figures representing all branches of the armed services. As a result, the figures on the buttresses and the reliefs over the doors between make the building’s purpose very clear. However, the Pool of Reflection that mirrors the building on the northern side represents Dellit’s call for passers-by to stop and remember.

Similarly, while the central sculpture, Sacrifice, at the heart of the building is Hoff’s, the form of the interior, itself very emotive, is Dellit’s. Here is ample evidence of his architectural imagery. He used impressive staircases, flanked by memorial urns, to lead the visitor up into the Hall of Memory. Once there, they must bow their heads to look into the Well of Contemplation in order to contemplate Sacrifice, in the Hall of Silence below, and look up to see the dome decorated with 120,000 golden Stars of Memory, each representing a serviceman or woman from New South Wales. In this manner, Dellit’s architecture and Hoff’s sculptures greatly enhance each other to provide an artistically integrated emotional message. 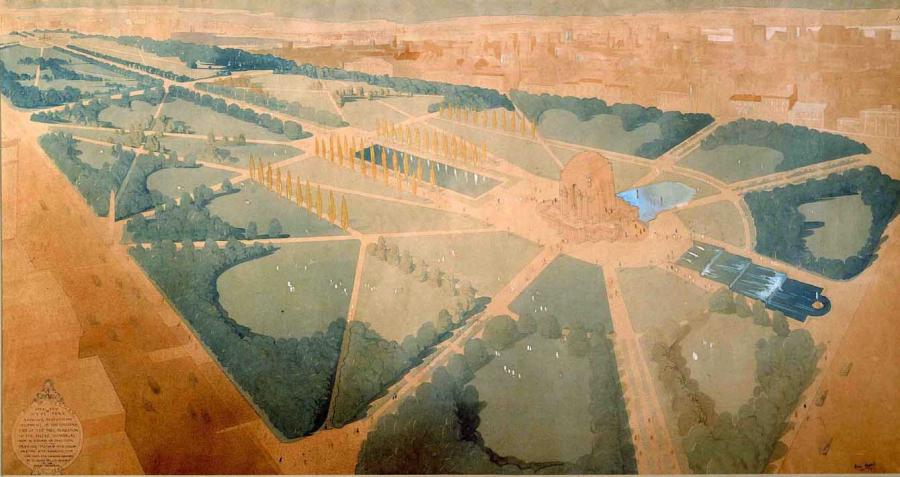 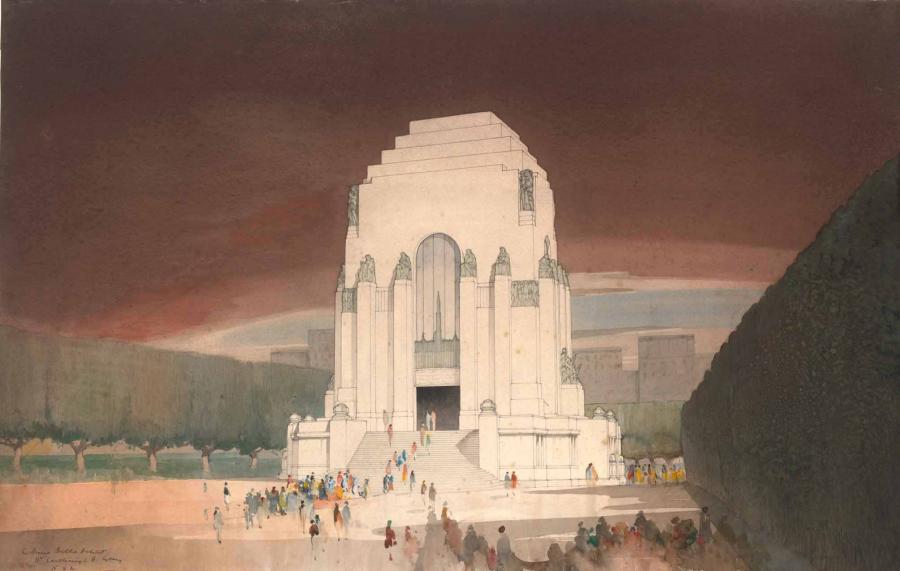 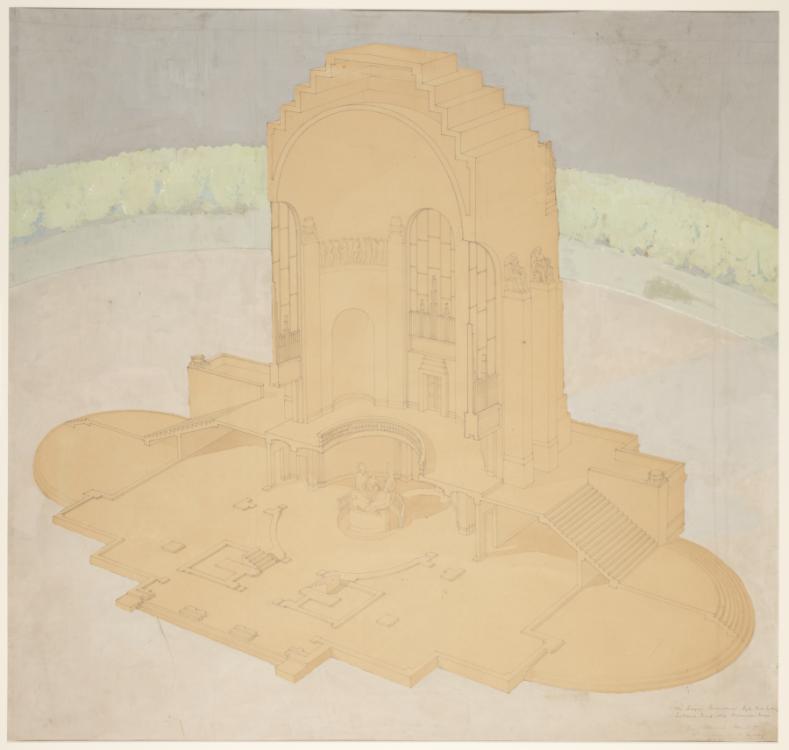 1941 — During a single patrol in a period of aggressive night raids and patrols around the perimeter of the besieged port of TOBRUK, 2/48th Battalion troops captured 803 prisoners. There were two Australian casualties