The Hall of Service artwork
The commission

In December 2015 a brief was finalised for the commission of a major artwork for the Hall of Service, the new civic space to be built in the Centenary Extension to the Anzac Memorial. The intent of the commission was to continue the tradition of integration of architecture and sculpture forged by the architect Bruce Dellit and the sculptor Rayner Hoff, who worked on the original Anzac Memorial. The artwork would reflect on the theme of “Service” underpinning the Centenary of Anzac recognition of a more than a century of service by Australian servicemen and servicewomen and create an artistic focal point for the new civic space. Positioned at the axis of the new education and interpretation facilities, it would link the new and old buildings and form a critical interface between the Memorial’s public spaces.

Submissions were received from seven shortlisted artists, and these were considered by an art committee convened by the Trustees. The committee’s recommendation of Fiona Hall’s submission was endorsed by the Trustees at an extraordinary meeting held on 4 April 2016.

Central to Hall’s proposal was the “Towns of Enlistment” list, a compilation of all the places in New South Wales from which the men and women who offered to serve in the Great War had come. This list of place names had been provided in the briefing material for the commission; it was created by extracting the address information from the Australian Defence Force Academy’s (ADFA) AIF Project database of First World War enlistees. ADFA had developed, refined and tested this database over the past 30 years.

The strength of Hall’s proposal was its basis in “material relating directly to service offered, across New South Wales, in the First World War”12. It was originally proposed to make use of the walls, floor, doors and ceiling, and to leave the interior of the Hall free of any 3-dimensional intervention to maintain and emphasise the spatial equilibrium and symmetry of the square Hall and its oculus to create and informative and meditative place, at the threshold of the Hall of Silence and beyond.

In a later expansion on her proposal to the Art Committee, Hall commented that her proposed resolution of the Hall of Service, in both its interface with the space and its conceptualisation, may not resemble my general practice. However, the Anzac Memorial’s historic place in Sydney, marking Australia’s seminal military endeavour and providing a place of pilgrimage puts it in the unique position to answer the needs of a diverse range of visitors. I have given much consideration to the way in which the Hall can become an activated space: a place of history, remembering, learning. My resolution of the space is an artwork, but for me the benchmark of its success, now and over the long term, will reside not in its authorship but in its capacity to enable viewers to feel a deep connection and resonance with our service given in the face of war.

In relation to the proposal’s focus on the First World War, she explained: The Hyde Park Anzac Memorial was built to commemorate participation in the First World War, which is often referred to as “the Great War”. Although it was a defining event in history, we know with hindsight that war is unlikely to bring about lasting world peace. Over the past century we’ve had to adjust to the reality that we will be participating in wars and commemorating our efforts for, most likely, time immemorial.

However to use the Hall of Service as an artwork space to commemorate all wars, including presumably all the ones lying in our future, seems to me to greatly dilute its focus and purpose. I think that people are hungry for knowledge, insight, ways to understand and connect with our history and our community. The specificity of information provided and the way it is presented is the draw-card of some of our most successful contemporary memorials; people want to know, and the information is potent.

The artist regards the Hall as "both an informative place, and also as a hallowed space to enable visitors to realise the enormity of the service and sacrifice given; there is no place in New South Wales which has not been touched by the First World War".

Alongside each place name Hall proposed including a triangular recess, containing a handful of earth collected from each listed location. With each space internally lit, this would have the effect of “collectively transforming the interior of the Hall of Service into a space of myriad small illuminations”.

The niche spaces were to be protected by glass, inset behind the bronze plaques displaying the place names. The face of the niche was originally proposed as an equilateral triangle; an archetypal geometric form to complement the two other geometric archetypes included in the design of the Hall of Service: the circle of the Oculus and the square of the floor plan. Hall commented “they are the triumvirate of geometry, and appear throughout the history of architectural structures, often with sacred associations. At present the niche is 800 mm deep, this can be adjusted if necessary in the final realisation of the work.”

For the final resolution for the plaques and soil containers there was an ongoing discussion between the artist and the architect, Richard Johnson, the Trustees’ representative, Caroline Mackaness, and the Content Manager, Richard Taylor, supported by graphic designer Lea Barnett and industrial designer Andrew Crick. Ultimately, the soil containers became round rather than triangular and the resolution of the bronze plaques came after lengthy trials and sampling of different production methods and finishes. Bronzeworks in Melbourne was chosen as the preferred supplier for its ability to work with the artist to create the finishes she was looking for.

On the floor of the Hall of Service, central in the space and directly beneath the Oculus, Fiona Hall originally proposed a double “rising sun” design, based on the hemispherical insignia of the Australian military forces. The alternating rays of the design were to bear the names of First World War battle sites where Australians had served: on the Western Front and in the Middle East.

As Fiona Hall put it in 2016, “Many of these names are engraved in our national psyche: they are signifiers of the service and sacrifice of our soldiers, and are names that have shaped and defined our sense of nationhood today.”

Inside the circle of radiating battle site names was to be a corresponding ring of embedded earth from each place, in recognition of the impossibility of returning the bodies of the fallen to their families and communities for burial and of how this was a source of immense sorrow. Hall proposed that “the earth from the sites of battle will where possible also be collected by school children. Together, the earth from Australian and northern hemisphere sites, placed in the walls and floor, bridges the gulf of time and distance and makes the Hall of Service a place of remembrance and unity”.

The concept for the floor evolved through discussions with Richard Johnson, and with input from the Content Advisory Committee, the Project Steering Committee and the Trustees. Following their feedback, Hall returned with an alternative proposal for a ring to be set into the floor of the Hall of Service that incorporated a chronological list of 100 international sites of military significance to New South Wales service personnel. The choice of sites was developed by Brad Manera, Anzac Memorial Senior Historian and Curator, in consultation with the ADF, military historians and other significant stakeholders. The list is far from a complete list of Australian battle honours, but it is symbolic in that it represents 100 sites to mark the centenary of the Great War and to honour more than a century of service.

The geographic reach of the call to serve

There are four pairs of sloping, pre-cast concrete walls within the Hall of Service which were proposed to display the “Towns of Enlistment”. At the time of proposing her work, Hall had calculated that there would be 154 names on each wall; across the eight fin walls giving a total number of 1,232. Hall presented the list in alphabetical order to enable visitors to easily search for specific locations.

The project not only facilitates obtaining the earth samples, but also creates an informative and timely opportunity for community and educational involvement across the state during the centenary of the war. The placement of the earth in the Hall of Service provides a way for each community to feel an enduring connection with the Hyde Park Anzac Memorial.
Fiona Hall

The original design for the Hall of Service called for pairs of sliding-glass doors at the entry points to the space. Hall proposed that each of the eight doors (four pairs) would be etched with an image of a plant species relevant to Australia’s Great War service, and to our national memorialising of that war. Fiona Hall planned to hand-etch all the images, each approximately 300 x 300 millimetres in scale, centrally onto the doors.

Several of these plants (rosemary, wattle, and Flanders poppy) will always have a close association with our remembrance days for the Anzacs, and for the wars Australia subsequently has and will participate in. The Aleppo pine (or “Lone Pine”) now grows at the Canberra Memorial (and many others) from seeds sent home from Gallipoli by a First World War soldier. Seeds of the Gallipoli rose and the Gallipoli oak were also brought home. Trees, symbolic of Lombardy poplars seen on the French and Belgian First World War battlefields, border the remembrance pool at the Hyde Park Memorial. Eucalyptus trees have been planted near many Australian war memorials, and were a strangely familiar sight in Egypt for Australian soldiers posted there during the war.
Fiona Hall

Following discussion with the Anzac Memorial’s Senior Historian, one change was made to the list of species: the waratah replaced the Gallipoli oak.

Following changes to the Hall of Service design and the deletion of the glass doors the inclusion of the botanical illustrations continued to evolve and ultimately a solution was settled on whereby the etchings would be made onto glass urns which would be displayed in niches set into the exterior of the Hall of Service walls facing the outer galleries. Adelaide glass artist Tom Moore was commissioned to create the glass urns to Fiona Hall’s design. She then completed the etching of the botanical illustrations in Adelaide and at the glass studio at the Canberra School of Art.

One component of Fiona Hall’s original proposal that was not adopted was her suggestion that the ceiling of the Hall of Service, surrounding the Oculus, might feature a map of the northern sky, as seen from Europe in 1918 at the time of the end of the war.

On a clear night, the Australian soldiers stationed in Gallipoli, on the Western Front and in Egypt and the Middle East would have looked up at a starlit, foreign, northern hemisphere sky. During those war years, and in the early 20th century, the view of the heavens would have been stark and bright; a century later in our urbanised electric light world few of us are able to marvel at the immensity and majesty and mystery of the heavens. In the abject conditions of the battlefields the starlit sky, even though studded with unfamiliar constellations, must have been a source of wonder, perhaps companionship and consolation, a doorway to hope and dream for a positive future.
Fiona Hall

The ceiling component was not progressed due to complexities involved in achieving this idea, implications for the architectural and engineering design and the strength of the other elements. 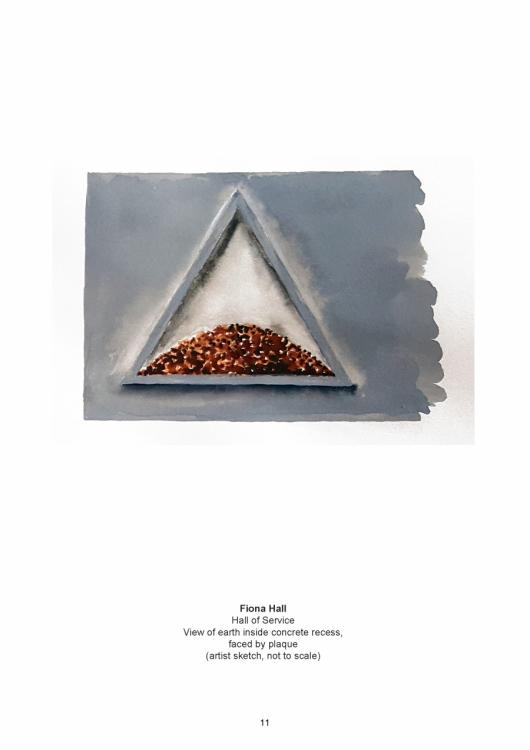 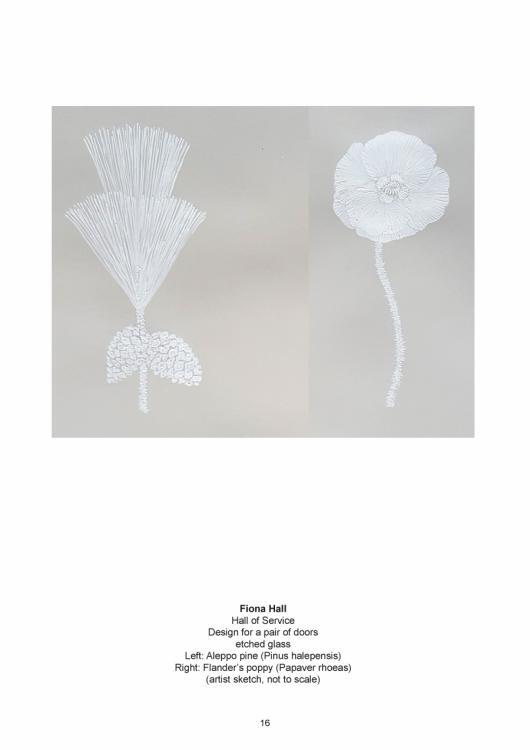 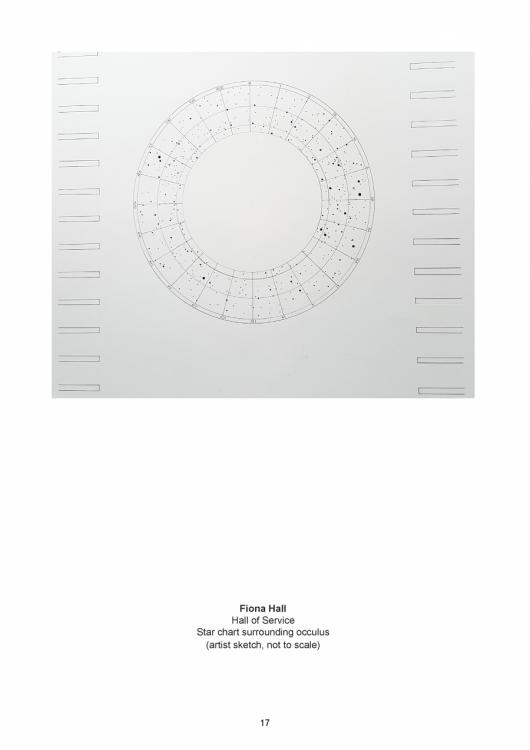