In 2020 this rather rare and fragile paper certificate, numbered 46838, was donated to the Anzac Memorial. In 1934 it had been purchased for two shillings as part of a state-wide fund-raising scheme; publicly raised funds were required to finish the interior construction of the Memorial in time before the official opening. The money was to be used to create a canopy of perpetually shining gold stars - a ‘constellation of memory’ in the great dome of the Hall of Memory. 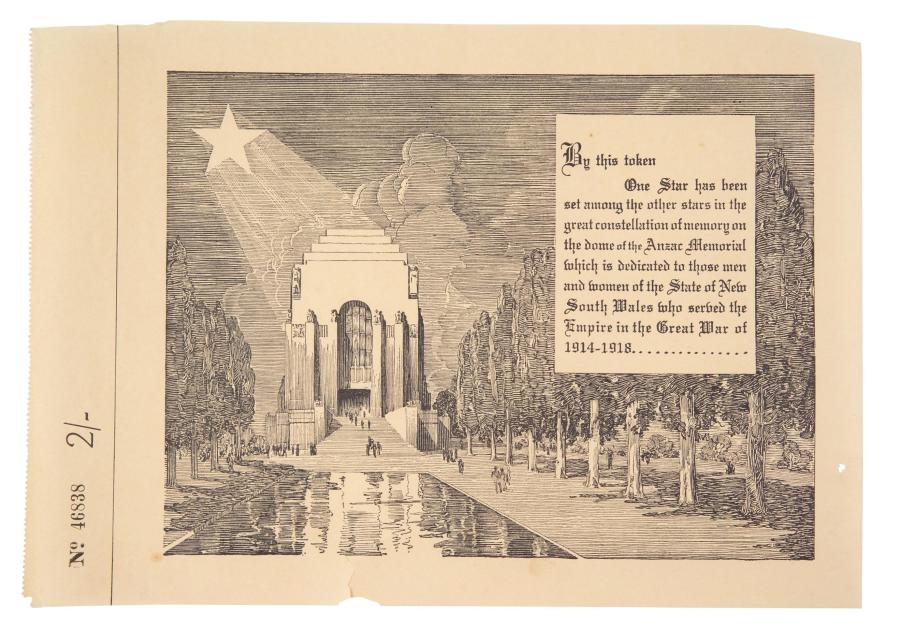 In February 1934 an urgent appeal was launched by the Trustees of the Memorial to raise fifteen thousand pounds and the Women’s Committee of the Returned Sailors and Soldiers Imperial League of Australia (RSSILA) mobilised across the state to sell the gold painted stars. This was not the first time fundraising for the memorial had been undertaken; indeed, raising money for the state’s premier war memorial had commenced at the time of the first Anzac Day in 1916.

By 1934 funds were running short and so the citizens of NSW were firmly exhorted to rise to the occasion and contribute to the star appeal which was cast as an important civic duty, akin to the efforts of patriotic fundraising during the war itself. Everyone who donated to the appeal was given one of these paper certificates bearing an illustration of the Anzac Memorial bathed in light from a star and with the Pool of Reflection, lined by poplars. The certificates were issued in various denominations depending on the number of stars bought. Remarkably, the Anzac Memorial has another of these rare certificates in its collection whose donor had given a rather generous five pounds towards the appeal. Happily the fundraising campaign was a successful one and the Anzac Memorial opened with the star-spangled dome completed in time.

BOTH MEMENTO AND FUNDRAISER To mark the opening of the Memorial an official volume, The Book of the Anzac Memorial, was published in 1934. Realising from the first how important it was that the general public should grasp the true meaning of the Anzac Memorial, the Trustees deemed it essential that an official volume, giving a physical description of the edifice and its spiritual and artistic significance should be published. It was hoped that the book would be a treasured memento in homes throughout the state and all proceeds raised were devoted to the Limbless Soldiers Association. A deluxe edition, bound in Morocco, and limited to 530 copies was printed. The pre-publication price of the deluxe edition was £2 and two shillings; a standard edition was also printed for half the price. Of the Hall of Memory and its ceiling stars the official book noted,

"Lighted with the mellow glow of amber glass from its four great windows, all of which face the cardinal points, the Hall of Memory is impressive in its grandeur, and is notable for the great constellation of Stars of Memory which grace its dome. This golden galaxy symbolises all those men and women from New South Wales who served in the war – one star for every man and woman who heard the call – a constellation of honour and memory totalling 120,000. These stars, placed high above the eye of the spectator and lighted by the amber glass of the great windows, makes of the interior of the Hall a place of sacred memories."[1] The Anzac Memorial was officially opened on Sunday 24 November 1934. Prior to the ceremony, a procession of over 20,000 returned servicemen marched from the Domain to Hyde Park wearing their war medals with pride. It was one of the largest parades held in Sydney since the war ended. It was a simple ceremony and from the western terrace, H.R.H. Prince Henry, the Duke of Gloucester gave a short speech in which he praised the sacrifice of the men and women who had died during the Great War. As he spoke, the symbolic buttress figures on the sides of the building gazed down upon more than 100,000 people who had gathered in Hyde Park to witness the momentous occasion. The Archbishop of Sydney offered the prayer of dedication and after the Last Post was played, a solemn one-minute silence descended upon the park for a short period of private contemplation. The souring sound of the Reveille and a robust rendition of the National Anthem concluded the formalities. Today, visitors to the Anzac Memorial marvel at the stars placed high in the dome of the Hall of Memory. It is indeed a place of sacred memories. The original light fittings still in the Vestibule and in the Assembly Hall also pay homage to the symbolism and the significance of the star as an enduring eternal emblem to all those who served, those who suffered and those whose lives were sacrificed during the Great War.