Australians and the battles of El Alamein, 1942

Sydneysiders and tourists visiting King’s Cross pass the distinctive watery globe of the Alamein fountain in Fitzroy Gardens, most without knowing its name or what it commemorates. Robert Woodward and Phil Taranto’s innovative dandelion-head-like fountain was designed as a war memorial, at the request of the King’s Cross RSL sub-branch, and inaugurated in 1961. It was dedicated nineteen years after the battle for which it is named. Two battles were fought in 1942 around the isolated railway halt of El Alamein, 120 kilometres west of Alexandria in Egypt. The 9th Australian Division fought as part of the Commonwealth Eighth Army, defeating a German-Italian attempt to invade Egypt and seize the Suez Canal. It was arguably the single most significant occasion when an Australian formation played a major part in a decisive Allied victory in the Second World War.

Australian land, sea and air forces played a significant role in the war in North Africa. After the Nazi conquest of western Europe, when Britain and its Empire and Commonwealth formed the final bulwark against Axis victory, Australian, Indian, New Zealand and South African forces formed a sizeable portion of the Allied defence of North Africa and the protection of the Suez Canal, the vital link between Britain and its Asian and Australasian possessions.

From mid-1940 (when Mussolini’s fascist Italy entered the war) the Mediterranean and its shores formed a major theatre of war. Australians were already training in the Middle East when Italy invaded Egypt, late in 1940, and its forces fought on, over and around the Mediterranean. When the Italians ran into difficulties early in 1941, the arrival of the German Afrika Korps, under its charismatic and effective commander Erwin Rommel, intensified the fighting, and the two sides launched major offensives in Libya and Egypt in 1941 and into 1942.

Warships of the Royal Australian Navy had fought against the Italian fleet in the battles of Cape Spada (1940) and in 1941 the battle of Cape Matapan, the evacuations of Greece and Crete and supported the defence of Tobruk and the campaign against the Vichy French in Lebanon. By 1942 they had mainly been recalled to meet the Japanese threat in Asia, but hundreds of Australian sailors remained serving in British ships and establishments as part of the Mediterranean Fleet, stationed from Egypt west to Malta and Gibraltar. Photo: Crew members of the RAN light cruiser HMAS Sydney (II) peer through a hole in the forward funnel. The damage was sustained in action against the Italian Cruiser Bartolomeo Colleoni off Cape Spada, Crete. AWM 002435.

Squadrons of the Royal Australian Air Force served in North Africa, notably 3 and 450 Kittyhawk fighter squadrons, part of the Desert Air Force, in which hundreds of Australian aircrew served in British and New Zealand squadrons. About ten per cent of aircrew in ‘British’ squadrons were Australians, trained under the Empire Air Training Scheme. They served in the first Spitfire squadron to arrive in Egypt, in mid-1942, in Blenheim and Boston light bomber squadrons, in Hudson bombers attacking Axis supply lines, with over 200 RAAF aircrew in the long-range Wellington bomber squadrons of 205 Group, based in Egypt and ranging across North Africa and the Mediterranean.

Resisting Rommel’s advance towards the Suez

The war in North Africa surged back and forth as the two sides launched successive offensives, with the mainly mobile armies moving vast distances across the open desert, limited only by their ability to supply their troops, vehicles and tanks, especially with fuel. Early in 1942, having been pushed back after the relief of Tobruk late the previous year, Rommel launched his final eastward offensive. In three months, the Eighth Army lost hundreds of miles of ground, pushed back across the Egyptian frontier. By July 1942, it seemed that the retreat might not end before Rommel’s German and Italian force reached and cut the Suez Canal, the nightmare that British strategists had dreaded since the canal’s construction eighty years before.

The British commander in the theatre, Claude Auchinleck, made a stand at El Alamein, when British, Indian and South African troops narrowly held Rommel’s advance. At the same time, Auchinleck summoned reinforcements from elsewhere in his vast Middle Eastern command and beyond, including the 9th Australian Division from Lebanon.

Early in July the 9th Division arrived at Alamein and immediately attacked in the coastal sector in which it would fight for the next three months. The Australians employed the skills they had learned at Tobruk, defeating tank and armour counter-attacks, with the NSW-raised 2/3rd Anti-Tank Regiment supporting the infantry around Tel el Eisa, destroying ten tanks on 14 July alone. Although further setbacks would follow – notably when virtually the entire 2/28th Battalion was captured in a botched attack on the aptly-named Ruin Ridge – the arrival of the Australians helped to blunt the Axis offensive, which by the end of July ran out of steam. In August and September both sides prepared for the next round. The Australians dominated their coastal sector – the commanding officer of a NSW battalion claimed ‘no man’s land’ as ‘our land’.

The two armies faced each other on a 65-kilometre front running south from the Mediterranean coast. The 9th Australian Division formed the northernmost of the eight divisions of the Eighth Army, which included divisions from Britain, India, New Zealand, South Africa, with brigades from occupied France and Greece. This was the only time in the war that Australians fought as part of such a multi-national coalition, and they were to play a crucial part in the second battle of Alamein, launched in October.

In the meantime, the two armies prepared for a renewal of the fighting. The Allies poured troops and equipment into Egypt (though having to steam around South Africa to reach the Suez Canal.) Most significantly, although Auchinleck had held Rommel’s advance, his disinclination to launch a counter-offensive prematurely led Winston Churchill to replace him, with an untested British general, Bernard Montgomery. Equally cautious, Montgomery also insisted on attacking only when he had a significant superiority in men, tanks and guns over Rommel, and largely adopted Auchinleck’s plans for the offensive.

The Germans and Italians remained short of everything, particularly because Allied ships, submarines and aircraft continued to disrupt the Axis supply lines across the Mediterranean. British squadrons based on the island of Malta (which the Axis powers inexplicably failed to invade or subdue) attacked supply ships and convoys, using the secret advantage of knowing where and when they would sail thanks to having broken the ‘Enigma’ codes.

The 9th Australian Division, under Lieutenant-General Leslie Morshead, who had commanded it through the siege of Tobruk, was one of the Eighth Army’s most experienced and tough formations. It comprised nine infantry battalions, supported by three field regiments of artillery, with pioneer and machine gun battalions and supporting services; about 16,000 men at full strength (though with the developing crisis in Papua, which came to a head at exactly the same time, virtually no reinforcements arrived from Australia.) The troops came from all over Australia, but the units recruited in New South Wales included the 2/13th, 2/17th battalions (both part of the 20th Brigade) the 2/2nd Machine-Gun Battalion and the 2/3rd Pioneers, with the 2/3rd Anti-Tank Regiment the division’s main defence against Axis tanks. In late October, with his troops equipped and trained for the coming offensive, Montgomery’s artillery, including the 9th Division’s three field regiments, opened a massive bombardment, the greatest seen in the war to that time. Late on 23 October the troops stepped over the start-line, entering and clearing the minefields protecting the Axis defenders. The 9th Division had a heavy responsibility as part of Montgomery’s plan. In the vital coastal sector, it was intended to draw upon it German and Italian counter-attacks, enabling other divisions further south to make the hoped-for break-through.

Montgomery’s plan took longer than expected – a man from Queanbeyan wrote in his diary on Trig 29, one of the most intense sites in the battle, ‘seven days, how much longer can it last?’ The German and Italian defenders fought ferociously, forcing Montgomery to modify his plans as the fight wore on. At last, unable to hold the line everywhere, Rommel’s depleted forces gave way, and British armour raced to cut-off the retreating Axis troops. While the more mobile German units managed to retreat, thousands of Italian infantry were captured.

New South Wales units were prominent in the two battles – the defensive battle in July and the offensive battle in October-November. They included the engineers and pioneers of the 2/24 Field Park Company and the 2/3rd Pioneers, while half of the 2/2nd Machine-Gun Battalion came from NSW. Its 2/13th Battalion took a prominent part in the opening attack in October. The 2/17th Battalion held the vital position of Trig 29 for crucial days. The six-pounder guns of the 2/3rd Anti-Tank Regiment were critical in a desert war in which tanks were so decisive – its men were awarded four Distinguished Conduct Medals in the July fighting alone.

El Alamein represented the final, decisive turn in the war in North Africa. Though much hard fighting remained, Rommel’s retreat ended in Tunisia, with the Axis surrender in May 1943. With the North African coast clear, the Allies regained control over the Mediterranean, preparing the way for the invasion of Italy later in 1943. Montgomery went on to command the British 21st Army Group in the invasion and liberation of western Europe. After the war, Montgomery reflected on the battle that made his name that ‘the more I think of it, the more I realise that winning was only made possible by the bravery of the 9th Australian Division.’

By then the 9th Australian Division’s war had changed dramatically. Early in 1943 it returned to Australia and, after a well-earned rest, went north to take part in the war in New Guinea and the islands. Its war would end in Borneo.

Victory at El Alamein was costly. In the two battles the 9th Division lost 520 killed (plus about 109 ‘missing’, who were later found to have died) and 1,948 wounded. Because of its role as the hinge of Montgomery’s plan, it suffered the Eighth Army’s highest per capita losses – about a fifth of the casualties of the entire army. Today the Eighth Army’s 7,350 dead, including 1,234 Australians (including 54 RAAF airmen), lie in the Commonwealth War Graves Commission’s El Alamein cemetery, located just two kilometres from the railway station which has given its name to one of the Second World War’s most decisive battles. 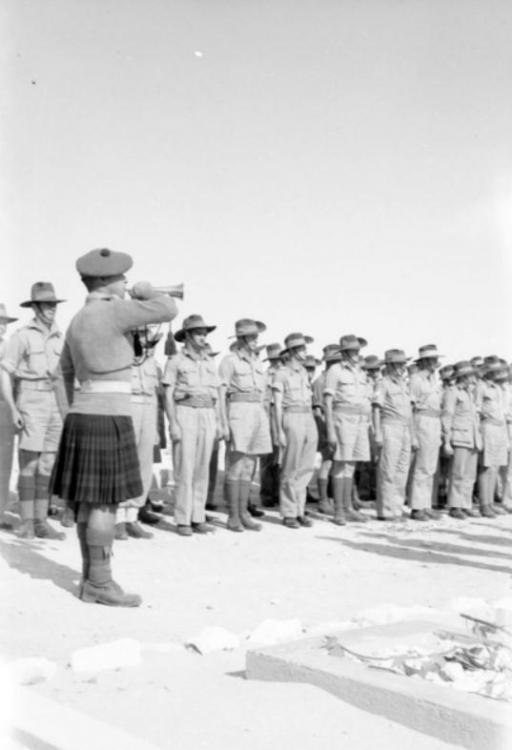 Photo: El Alamein, Egypt. 11 November 1943. The bugler, Private G. Campbell of the Argyle and Southern Highlanders plays the Last Post as members of the original 6th Division, AIF prisoners of war (POWs), repatriated from Germany, pay their respect to their fallen comrades of the 9th Division. AWM MEA0957.

There are many good books on El Alamein, such as Nigel Hamilton’s multi-volume biography of Montgomery (1981-87), Michael Carver’s El Alamein (1963), or Nial Barr’s Pendulum of War (2004), though mostly written from a British perspective.