In 2006 a large collection of letters, telegrams and black-and-white photographs relating to the wartime service of Rodney Marwood Costley were very generously donated to the Anzac Memorial. Costley narrowly escaped being taken a prisoner of the Japanese at the fall of Singapore on 15 February 1942, although tragically, like many Australians serving in the Pacific theatre, he did not survive the war.

Rodney Costley was born in Sydney on 28 July 1907. Unmarried and living with his mother on Young Street in Annandale, on 3 March 1941 the 33-year-old clerk enlisted in the Australian Army. Private NX68538 Costley was attached to 2/3 Reserve Motor Transport Company as a truck driver and served in Malaya and Singapore delivering vital supplies of ammunition and food to the troops. On 9 February 1942, with Singapore under sustained attack from the Japanese, Costley’s unit was officially evacuated from the island in the steamer SS Kinta and sailed to Batavia (Java). Six days later, Singapore, Britain’s supposedly impregnable island fortress in South-east Asia fell to the enemy and the entire garrison was forced to surrender. More than 130,000 British and Dominion troops were now prisoners of war including more than 15,000 Australians. Costley sent regular telegrams and letters back home to his mother Bertha in Annandale. From Java, on 26 February 1942 he penned her a note to let her know that ‘everything is going well’ and to reassure her that her worry ‘might be able to ease right off in the near future.’ During the war, Java, the main island in the Dutch East Indies was occupied by a sizable force of Dutch, British, American and Australian troops. Alas, just two weeks after Costley’s cheering words had been sent to his mum, on 12 March 1942 the allies on Java were forced to capitulate to the invading Japanese, further swelling the numbers of allied prisoners of war in the Pacific.

Costley and his mates were subsequently sent to the steaming, monsoon-soaked jungles of the Burma-Thailand railway construction camps by their Japanese captors. Initially he was stationed at Thanbyuzayat in Burma’s south (65 km south of the port of Moulmein) where the overland railway commenced. Here, the prisoners laboured in treacherous conditions with meagre rations, the ever-present threat of disease and malnutrition, and under the watchful, vengeful eyes of their brutal guards. Tragically, almost 8,000 Australian POW’s would unnecessarily die from illness, neglect and ill-treatment at the hands of the Japanese during the war. 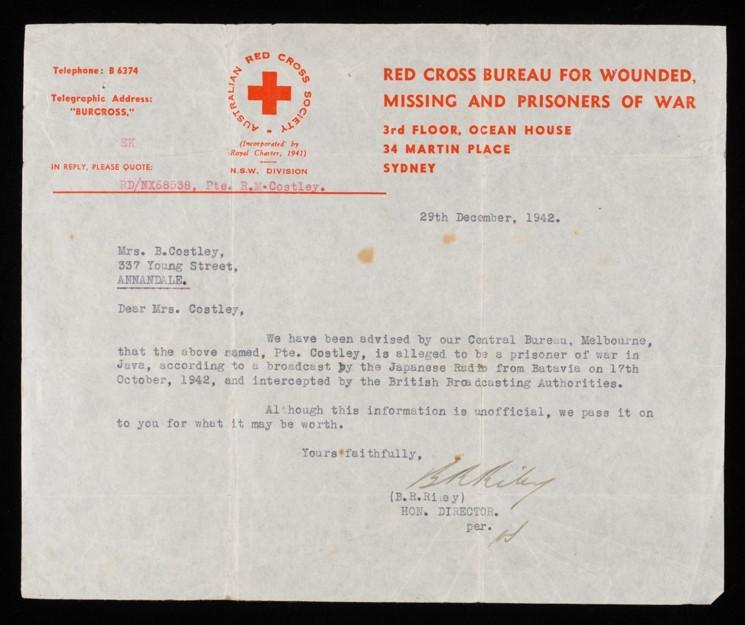 Back home, in December 1942, Bertha Costley was informed by the Red Cross Bureau for Wounded, Missing and Prisoners of War that her son had allegedly become a prisoner of the enemy. Sadly, on 13 August 1943, the then 36-year-old Costley succumbed to disease and died in a POW camp by the railway in Burma. He was buried at Thanbyuzayet War Cemetery. ‘Thy Will Be Done’ was later inscribed on his headstone. Bertha Costley received a number of condolence cards to both mourn her beloved son’s death and to honour his wartime sacrifice. 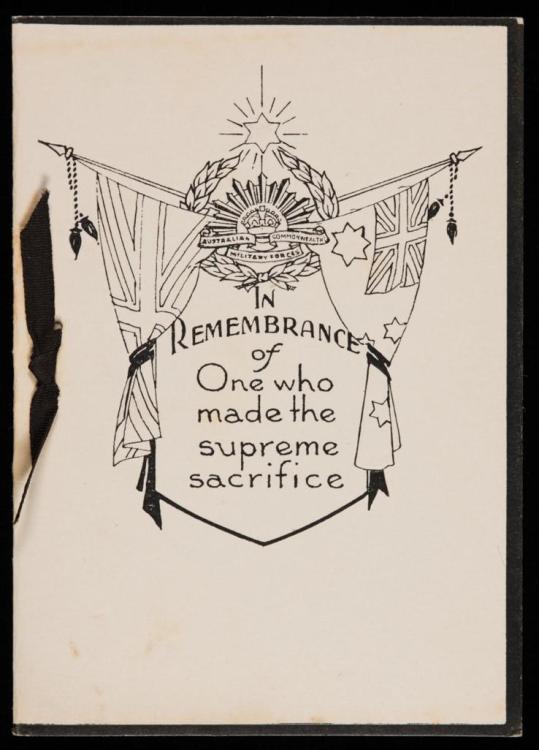