Rabaul, situated on the Gazelle Peninsula lies on Blanche Bay, inside the north-eastern tip of New Britain, the largest and most important island of the Bismarck Archipelago. Formerly part of German New Guinea, the island had been seized in September 1914 by an Australian Expeditionary Force under Colonel William Holmes and remained under military government until May 1921. In fulfilment of a mandate from the League of Nations, Australia then established a civil administration throughout the Territory. In 1941 the Australian War Cabinet agreed to send an AIF battalion to Rabaul. Lieutenant-Colonel Howard Carr’s 2/22nd Battalion, plus support units, was selected for the task. The garrison, known as Lark Force, arrived in March and April 1941 to defend the small yet strategic naval outpost and protect its vital airfields from possible enemy attack. Other smaller units followed later that year and in October, Colonel John Joseph Scanlon DSO and bar, a veteran of the Great War arrived to take control. In December, a RAAF unit of four Hudsons and ten Wirraways under the command of Wing Commander John Lerew began reconnaissance operations from the air strips at Lakunai and Vunakanau. That month, the compulsory evacuation of European women and children not engaged in essential services began. Japan had only just entered the war, however an audacious attack from their Pacific bases was believed to be almost imminent.[1] 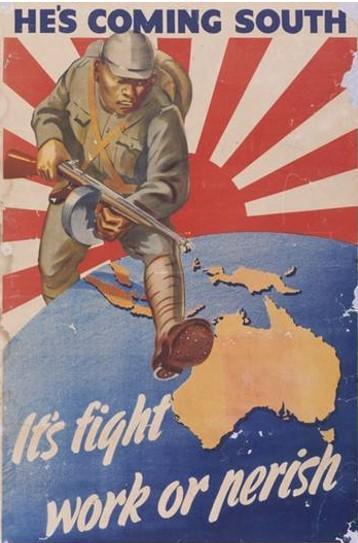 The ominous portends were to be correct and the first heavy bombing raid on Rabaul occurred on the morning of 4 January 1942. The aerial onslaught continued throughout the month as planes of the Imperial Japanese Navy Air Service targeted key objectives; shipping, wharves, airfields and coastal defence guns. Lerew’s No. 24 Squadron was virtually eliminated, the RAAF eventually withdrew and the Australians destroyed the airfields.[2] On 21 January a large enemy convoy of destroyers, cruisers and transports was spotted heading towards the island. In the early hours of 23 January, the Japanese (comprising a 5000-strong invasion force) made a stealthy amphibious landing upon various beaches around the island. Supported by heavy bombing from the air, by nightfall Rabaul had all but been taken.

Whilst the single Australian battalion, thinly dispersed around Blanche Bay attempted to repel the invaders, they were ultimately forced to retreat. Astonishingly, there had been no organised withdrawal or evacuation scheme made before the invasion. Colonel Scanlan’s men were pushed to the north and south coasts or they took off and hid in the mountainous jungle terrain of the interior. Command from the top had broken down so much so that the men were told it was ‘every man for himself’. Indeed, all military control seems to have collapsed. According to Lionel Wigmore, ‘as the troops withdrew they left their communication and supply routes, and along the tracks they were to traverse, few stores of food, ammunition or medical supplies had been organised or established.’[3] With few resources to resist the invaders, many of the Australian troops quickly became demoralised in spirit; they also became physically weakened by the lack of food and the ever-present danger of malaria. This was to sadly characterise the subsequent experience of many Australians held in captivity in the Pacific theatre by the Japanese during the war.

The strength of the Australian force at Rabaul in January was estimated at 76 officers, 6 nurses and 1,314 others. Of this number 2 officers and 26 men were killed during the fighting on the island on 23 January.[4] Some 400 managed to evade the Japanese by hiding in the jungles and mountains, eventually escaping back to Australia via New Guinea. Tragically about 160 who had either surrendered or had been captured by the Japanese were coldly and very brutally massacred by bullet and bayonet at the Tol Plantation in early February. Six men survived these killings and later described what had happened to a court of inquiry. The lucky (at least for now) few that remained, became prisoners of war. Of some 300 civilians on Rabaul most were rounded up and placed in a camp with the Australian prisoners. On 22 June 1942, 849 military prisoners composed principally of troops of the 2/22 Battalion and about 200 civilians were embarked at Rabaul on the MV Montevideo Maru. Tragically, on 1 July 1942 the Montevideo Maru was torpedoed and sunk by the American submarine USS Sturgeon off Luzon in the South China Sea; there were no survivors among the prisoners.[5} On 6 July, the remaining sixty officers of Scanlan’s forces and nineteen Australian women (including six Army nurses) were also shipped from Rabaul as prisoners of the Japanese, reaching Yokohama on 15 July.[6] The taking of Rabaul had been the first major significant Australian victory during the Great War in 1914. In January 1942, the loss of the strategic island was an overwhelming success for the enemy and a weighty blow to the defence of Australian and allied interests in the Pacific. Tragically, the fall of Singapore and the captivity of the 8th Division in February 1942 would merely intensify Australia’s Pacific war. It had already come far too close to home and for many, the bombing of Darwin was to be the next fatal blow.