At dawn on 20 May 1941 the early morning calm, breaking over the Sea of Crete, was interrupted by a menacing, irregular hum that grew in intensity as the sea mist cleared. Australian, New Zealand, British and Greek troops rising from sleep in their weapons pits, beneath the grape vines and olive groves, did not have long to wait before the hum became a roar and materialised into the sight of a fleet of troop carrying and glider towing aircraft flying in from the north. As they crossed the coast of the island of Crete and banked to the right, the men on the ground saw the ominous sight of the black crosses and swastikas on the fuselages and wings. The air armada headed for their intended drop zones between the largest city Xania [then spelled Canea on British maps] and the western airfield Maleme. The first battles of the ten-day campaign had begun. The Germans codenamed the invasion Operation Merkur [Mercury]. The stubby corrugated bodies of the Ju52s ran parallel to the coast, climbed to just over 100 metres and vomited their human cargoes. Parachute canopies billowed as German paratroopers, the elite Fallschirmjager, dangling helplessly, suddenly found themselves descending into a storm of rifle and machine gun fire. On their flank German glider troops fared no better. The thin fabric, timber and light metal frames and skin of their gliders offered no protection to raking bursts from automatic weapons. Many were dead before they hit the ground, others gunned down as they disembarked and ran for cover.

In the early afternoon, a second wave of paratroopers descended on other targets on the island including the port city, in the centre of the north coast, at Iraklion [then Candia] and, between the two, the auxiliary airstrip to the east of Rethymnon [Retimo]. At Retimo a Western Australian and a NSW battalion, supported by two hastily formed and inadequately armed Greek regiments, drove off or trapped the invaders over ten days of intense fighting. At Candia a British brigade with a NSW battalion, the 2/4th, fought the Germans to a standstill. Sadly, their courage and tenacity was in vain as the New Zealanders had been driven back from the airfield at Maleme allowing the Germans to establish a foothold on the island.

From the tenuous airhead at Maleme a division of Austrian mountain troops were flown in to support the beleaguered paratroopers fighting for their lives. Supplemented by a handful of armoured vehicles and absolute air superiority, the Allied garrison had no answer to the German advance.

By the end of the month the Germans had overcome the last of the resistance and one by one the last pockets of Allied troops were wiped out, taken prisoner or, as individuals and small groups, escaped into the mountains. With the end of the campaign Europe was lost to the fascist invader for over three years.

The Allies had always known that committing troops to fighting in mainland Greece and on the island of Crete was going to be a challenge. British Prime Minister Winston Churchill had referred to the expedition as ‘a great risk in a good cause.’

The campaign began when the Germans threatened Greece. The Greek Army was presenting such stubborn resistance to the invasion by Mussolini's Italian troops that Hitler was drawn to his Mediterranean ally’s aid. Britain stepped in committing the 6th Australian Division and the New Zealand Division with units of British armour with a couple of RAF squadrons in support. It was not enough.

On 6 April 1941 German armoured columns crossed the Yugoslav frontier. Supported by Stuka dive bombers of the Luftwaffe the Allies had no answer to Nazi tanks and warplanes.

Within days the Germans had driven the defenders back as far as the Vevi Pass. The New South Welshmen of the 2/4th Battalion faced a German enemy for the first time at Vevi on 10 April when they were hit by the irresistible lead regiments of the Leibstandarte SS Adolf Hitler Division. Despite a stubborn resistance, in the bitter cold, numbers and technology told.

The British and Australian defenders fell back to the Aliakmon Line. A week later the New South Welshmen of the 16th Brigade held the Germans at Tempe Gorge but, again, the best they could manage was a delaying action.

By Anzac Day 1941 the Australians and New Zealanders had been driven from the mountains and passes of the rugged Greek mainland. The desperately tired troops stood with their backs to the sea. To their rescue came the Royal Navy as it had done in Norway and Dunkirk less than a year before.

The Australian light cruiser HMAS Perth was among the flotilla of vessels large and small that came to lift troops, fatigued and disorganised but still full of fight, from those exposed beaches. They braved constant attacks from the Luftwaffe and the all-too-present threat of fast Kriegsmarine torpedo boats.

The evacuation was as hazardous as any the Royal Navy had ever attempted. Dozens of vessels were lost or damaged. Hundreds of sailors and soldiers from the multinational Allied force drowned but thousands were saved, transported back to Alexandria, or dropped off on Crete, to defend the island.

Among the AIF personnel committed to the combined Australian, New Zealand and British contingent codenamed Lustre Force, tasked with defending Greece, were the women of the Australian Army Nursing Service and the Australian Army Medical Women's Service. Among them was a British born physiotherapist from Sydney named Beryl Joan Crowdy. Beryl’s wartime letters, diary and photograph album are now part of the collection of the Anzac Memorial. Her words and photographs capture the excitement and tension she felt as a participant observer in that great clash of nations.

During the retreat through Greece on the road from Corinth she wrote a letter to her parents in which she informed them:

‘A Greek convoy of refugees had been machined gunned and the road was full of terrible holes and strewn with dead horses, men, donkeys, derelict trucks & carts. There was one large truck right across the narrow road & the few Greeks who were left said they couldn’t shift it. However eventually they found out they could at the point of a revolver … One of the spotters sighted a plane, so all the convoy was halted and out we all hopped and lay flat on our faces with tin hat in the barley… the planes appeared … and machine gunned the road! I’ve never felt so helpless in all my life and believe me, I didn’t lift my head for ages after they had gone.’ 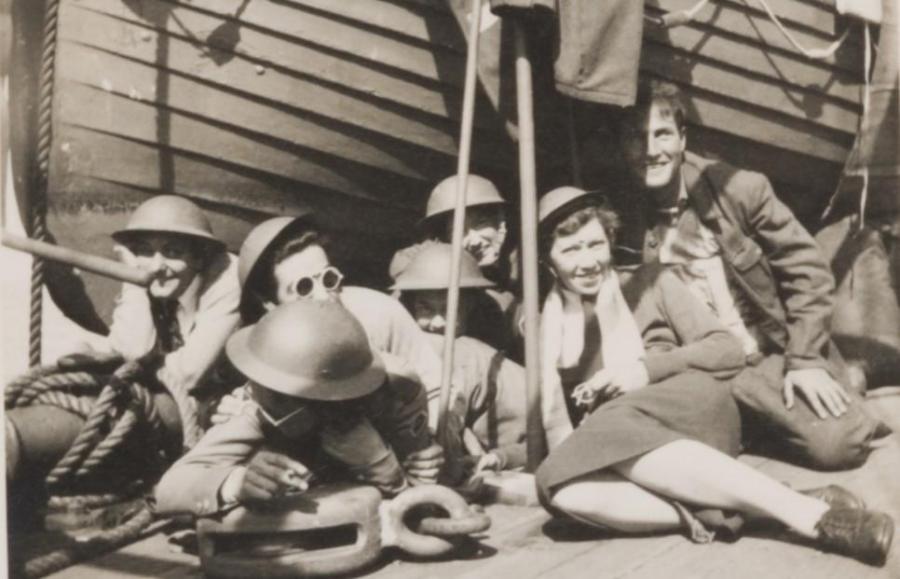 Photo: Photograph of NX70642 Beryl Joan Crowdy on HMAS Voyager on Anzac Day 1941 during the evacuation of Greece. In her album she labelled it ‘During an Alert’. Anzac Memorial Collection. Photo: ‘On the Way Back’, page from the Beryl Joan Crowdy photograph album. Anzac Memorial Collection.

Crowdy and her fellow nursing sisters from the 2/6 Australian General Hospital were evacuated from Greece to Crete and were later safely returned to Australia. By the wars end, Crowdy was serving as a Captain at No. 1 Australian Orthopaedic Hospital, assisting those wounded in the Pacific to recover their mobility.

The first infantry division raised in Australia to fight in the Second World War, the 6th, was badly mauled in the Allied defeats in Greece and Crete. Over one third of the 17,125 men of the 6th Division and attached troops were killed, wounded or captured. Losses to the 2nd Australian Imperial Force in the Campaign in Greece in April 1941 were 320 killed, 494 wounded and 2,030 made prisoners of war. In Crete between 20 and 30 May 1941 another 274 were killed, 507 wounded and 3,102 made prisoners of war. Today soil samples from Vevi Pass, Tempe Gorge and Retimo feature in the floor in the Hall of Service at the Anzac Memorial to honour their service and supreme sacrifice.